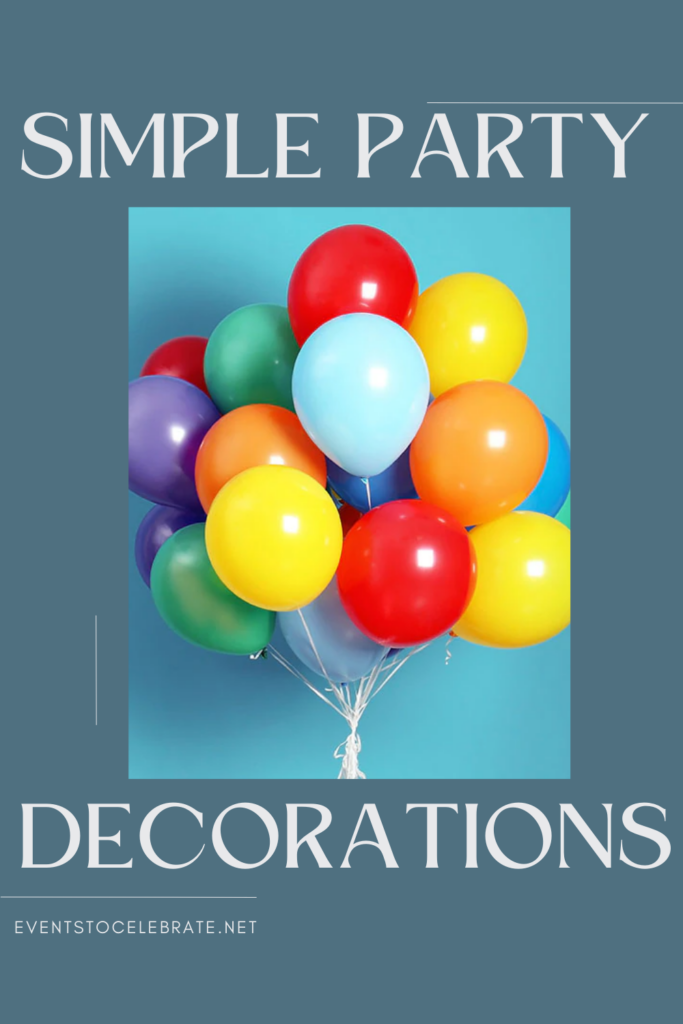 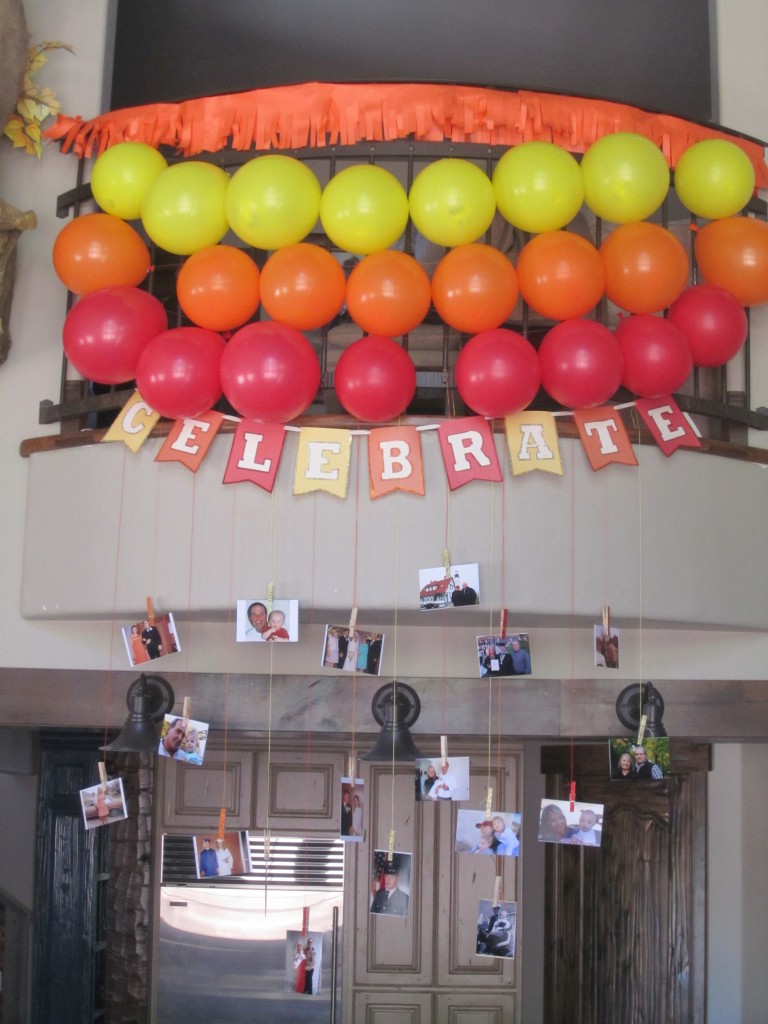 I recently did these cute, but simple birthday party decorations for my incredible in-laws. I really lucked out and got amazing in-laws. This year both of them turn 60, just a few months apart from each other so, as a family we wanted to do something big to celebrate. My brother & sister in-law (my husbands brother and his wife) just finished building a cabin in the mountains of western Colorado and they offered to host the entire family there for the weekend celebration! We assigned each family meal to provide and each family was asked to bring an activity for the kids to do. Since I was an hour from the nearest anything – I had to keep the birthday party decorations simple enough to transport and set-up. So, I decided created a decorative treatment for the balcony that opens over the kitchen and family room. 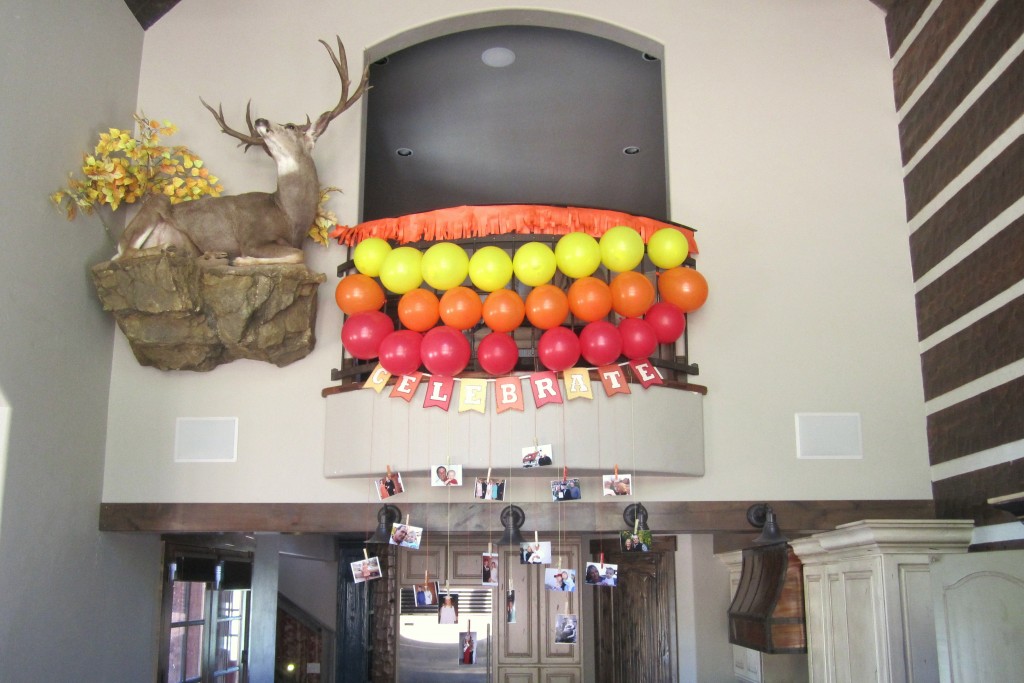 I wanted a gender neutral color palette, but wanted it to be fun and bright, so I selected Red, Orange and Yellow. I used the orange butcher paper fringe that my sister made for this party for the top layer. Then I used a needle and thread to string together 8 of each color balloon and taped the ends of each string to the balcony for the second layer. 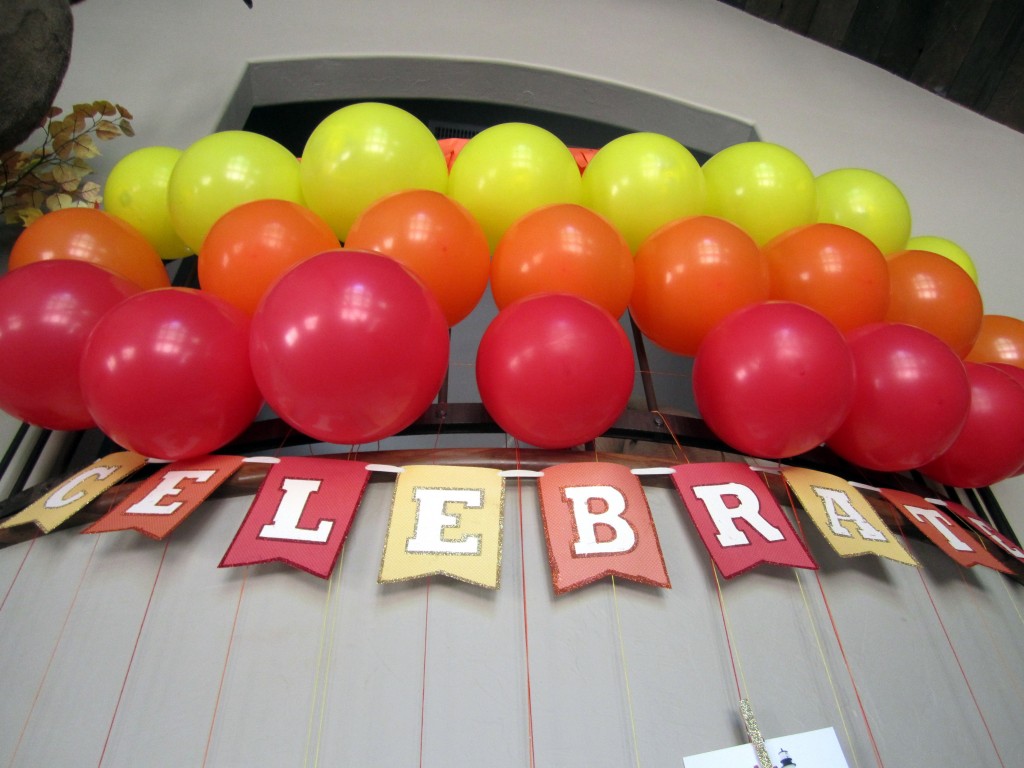 For the third layer I created a banner using patterned paper from Hobby Lobby and cream cardstock for the letters. I used my Silhouette to cut them out and then ran glue along all of the edges to add glitter in coordinating colors. 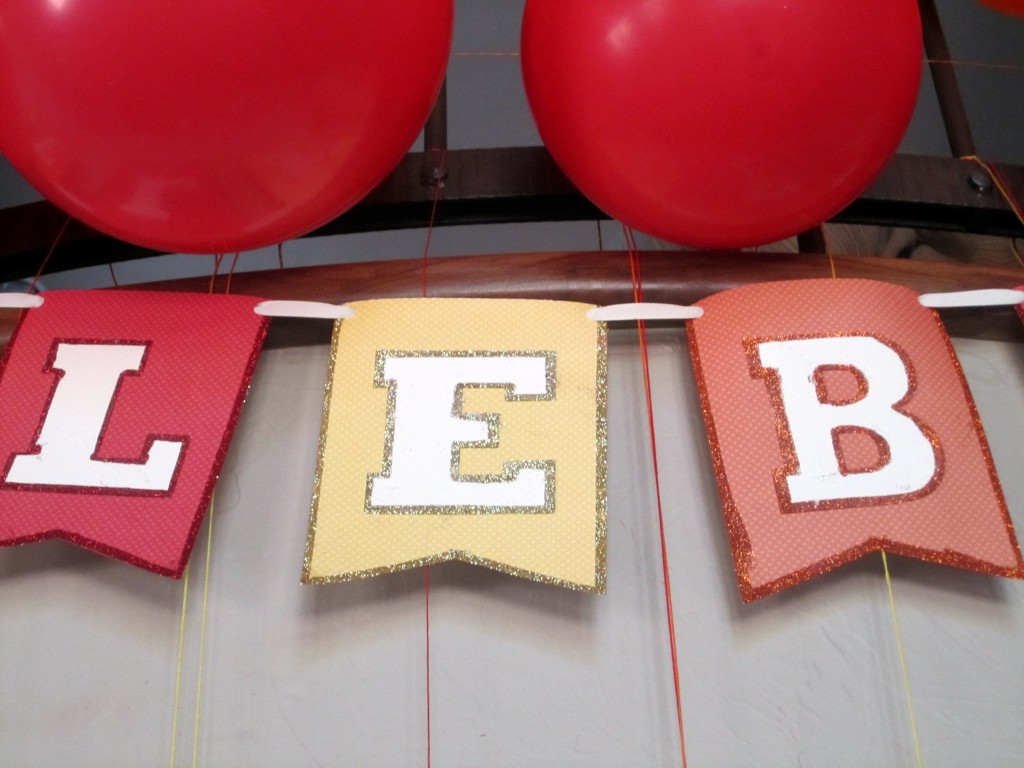 For the fourth layer I wanted to personalize it by featuring photos of my in-laws from various stages of their lives. They were high school sweethearts so I included photos from them in high school all the way to now. I added glitter to clothespins and tied them to the balcony using embroidery floss in Red, Orange and Yellow. 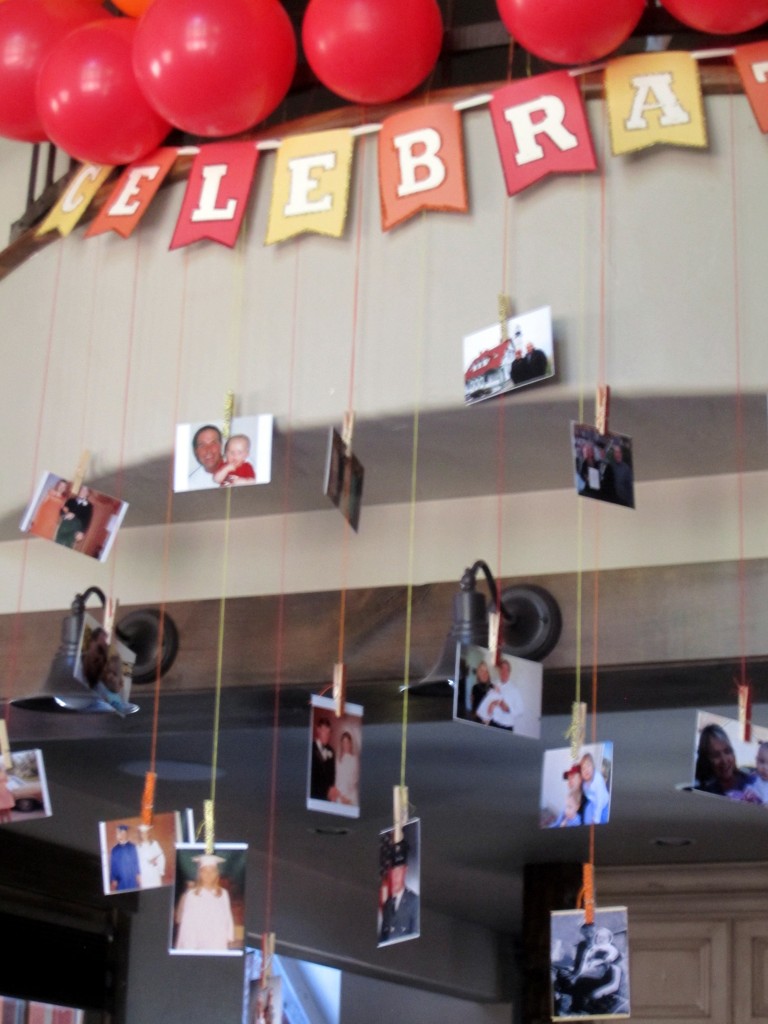 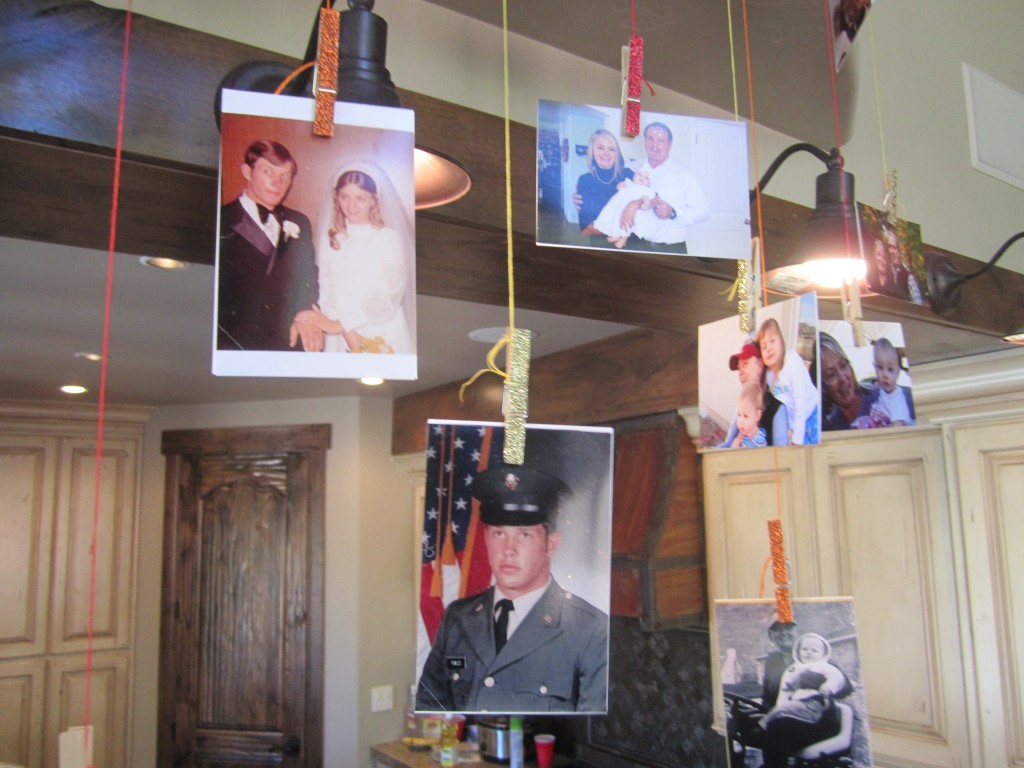 Although the entire weekend was technically celebrating their birthdays – I wanted to still have a “birthday party” one of the nights.  We had pulled pork sandwiches (this recipe – and trust me, it got rave reviews!), coleslaw (this recipe, anything from Our Best Bites is yummy!), watermelon, cornbread and cake (from Schmidts in Salt Lake City, UT). Then we all watched a movie in the theater room while we indulged in some of the favorite types of candy of my in-laws that I had brought. 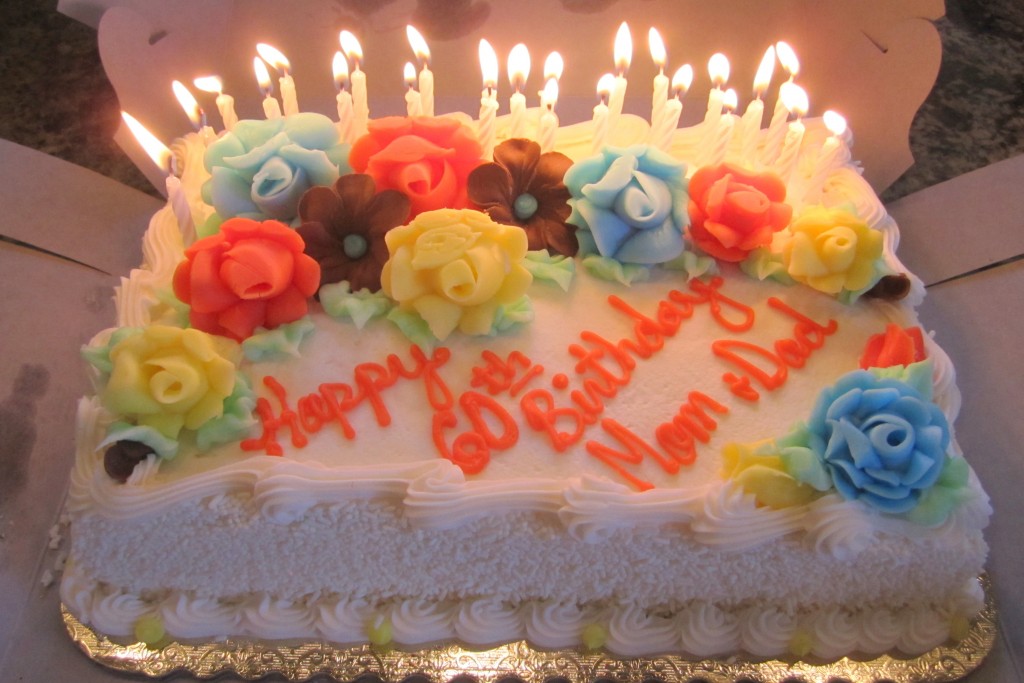 It really was an incredible weekend, we went on rides all around on the Rangers: 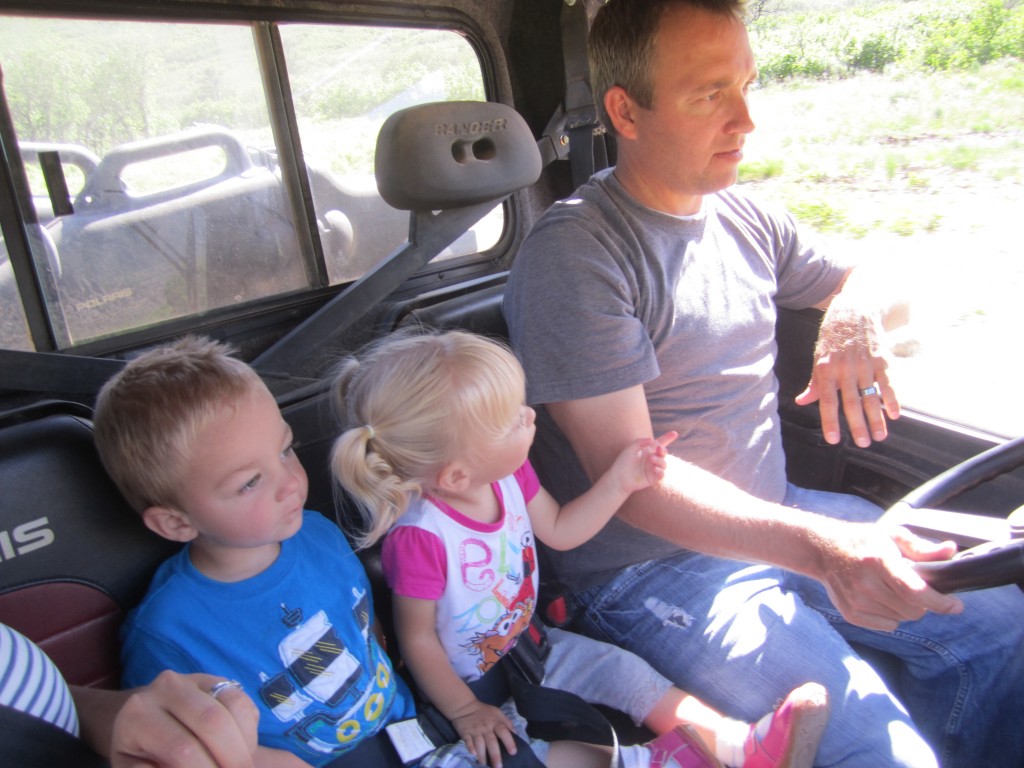 Made Birthday cards for Grandma and Grandpa: 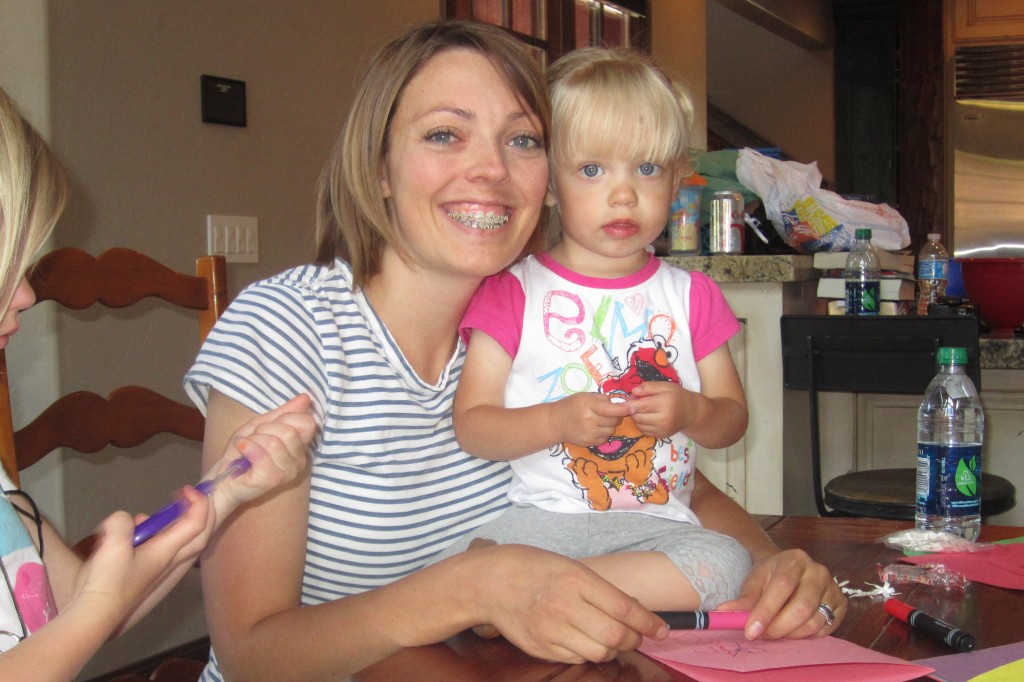 Keeping things simple really helped me focus on the time with family and it was a fantastic weekend for everyone!