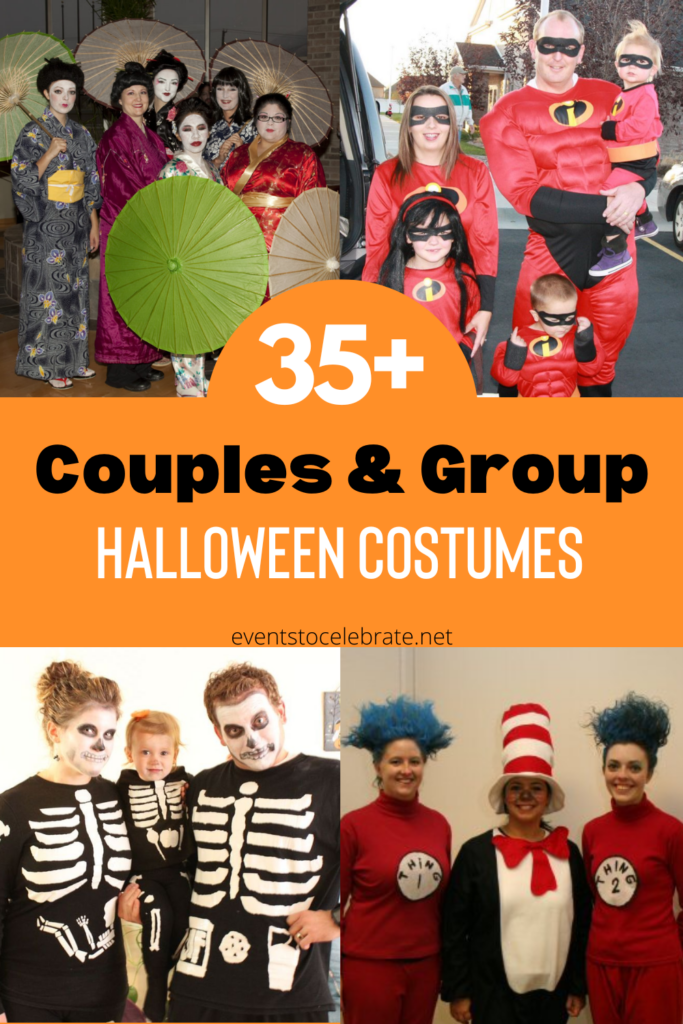 Planning our Halloween costumes is something I look forward to and plan for months! When I worked as an event planner we would each brainstorm group costume ideas and then narrow it down until we had the perfect group Halloween costume to compete with all of the other departments. Since then, I have loved planning couples costumes for me and my husband. We love to host our family Halloween party each year and having a fun couples Halloween costume just adds to the fun!

The Wizard of Oz Halloween Costumes

For the DIY Tin Man costume we used a colander for the hat and silver spray paint over clothes we bought at the thrift store.

The DIY Cowardly Lion costume was made from a paper grocery bag with curls of brown paper glued to the bag.

I’m Galinda in the bottom photo and my sister made and wore that pink dress to prom in the 80’s! Awesome, right?!

To dress up as the Four Seasons and Mother Nature we each took a season and created our own costume.

For a great Spring costume, you’ve got to have a cute umbrella with raindrops suspended from it.

A Summer costume needs a sarong and swimsuit do the trick. What Mother Nature costume would be complete without a beautiful foilage wreath crowning your head.

My bag of Fall leaves was made from a giant black garbage bag stuffed with packing air bubbles and a shirt that I glued artificial fall leaves to.

What goes better with peanut butter and jelly than ice cold chocolate milk?! These ladies went all out crafting their sandwich pieces from crafting foam from JoAnn’s (make sure you use your 40% off coupon!). Chocolate Milk costume was a cinch with a large cardboard box and craft paint.

I think this is one of the most clever and funny group halloween costumes I’ve ever seen! They were all dressed as a KING! They had an Elvis Presley costume, King Kong Gorilla costume, Michael Jackson costume (with the silver glove – a must!), the King of Hearts costume, Lion King costume (with baby Simba) and a Don King costume. So awesome!!

We hit the jackpot when we found a local bridal shop that was selling used prom and bridesmaid dresses from the 80’s and 90’s for $10.00 each! It was so hard to narrow it down to the ones we bought! We used a whole bottle of Aqua Net hairspray and added a sash that said “1980 Prom Royalty” and thought it was extra funny that two of the women in our group were pregnant at the time.

Circus halloween costumes are really fun for a large group! They had everything covered from a ventriloquist and dummy to a tight rope walker and the bearded lady!

The Cat In The Hat Halloween Costume

The Cat In The Hat costume was purchased and then my coworker and I made our Thing 1 & Thing 2 Halloween costumes. We bought red clothes from a thrift store and used white felt and a fabric marker to create the circles. My coworker purchased a Thing 1 & Thing 2 wig, but I used a lot of gel and a blow dryer to get mine to stand up straight and then sprayed it with blue hair spray.

A trip to our local thrift store scored us these silk robes for our Geisha costumes. I had the parasols left over from my wedding and then some bought a Geisha wig, but I actually used a caveman wig that I had in my costume box and pulled it up into a bun.

Dressing up as a family of Pirates is a lot of fun. It allows for individuality but you are still themed. I love the belts this family used – it really pulled together the costumes!

The Accounting department made the cutest Road Sign Halloween Costumes! So simple, so inexpensive, but totally AWESOME! I like that they took regular signs and costumized them a little to their accounting lingo.

With a few purchased items for these Yo Gabba Gabba costumes and a few DIY pieces, this cute family (my niece) is all set for Halloween!

Hilarious right?! You wish you had thought of this one first, don’t you?! This is my friend and a group from her church. The Von Trapp family costume without Maria, the Nun and all of the children!

If you’re a group or family of 5, this Incredibles costume is perfect!

Super Hero costumes are going to be really popular this year, so why not get a group together and coordinate to be The Avengers?!

The Nightmare Before Christmas Halloween Costume

Dressing up in Nightmare Before Christmas Halloween costumes is one of my favorite themes! I love when they change the Haunted Mansion ride at Disneyland with all of the Jack Skellington decorations! Love, love, love this!!

Okay, that blow up Sumo Halloween costume makes me laugh out loud! Especially since I know the guy inside is slender (is that the right word to use on a guy?). To round out the costume, his wife and kids were Geisha. So cute!

My friend Laura made these darling Skeleton costumes. It was also their clever way of announcing their pregnancy (cute!!).

Homer, I mean, my husband, is a huge Simpsons fan! He dressed up as Homer Simpson (we bought him a bald cap and covered him in yellow face paint) and I went as Marge Simpson. I used this DIY Wig tutorial to create my DIY Marge Simpson Wig. Then my friends dressed up as Selma and Patty.

Miss America costumes can be varied. Just find a glitzy dress and add a sash. We made it a little more fun by doing a dress from each of the decades: 1960, 1970, 1980 and 1990. Recognize that pink dress third from the left? That was my Galinda costume for the Wizard of Oz.

When you have kids as cute as these, it is so fun to do a family halloween costume! My friend Angie made much of the costumes, but purchased the Mario Brothers hats.

This is a simple, inexpensive costume that you can put together at the last minute! Just cut up a few brown paper grocery bags, fashion a feather headdress and you are all set!

Aren’t my kids so cute!? That Goldilocks costume was actually a Dorothy costume, but I figured it worked, especially when she was standing next to the rest of us. And my son turned out to be the CUTEST little baby bear! For my husband and I a brown sweatshirt with a felt tummy circle  (safety pinned on – I wanted to be able to unpin them and use the sweatshirt after Halloween) and some Monkey ears turned us into Mama and Papa Bear!

Who thinks of these things? Some people are so creative, it is amazing! I love it! They created costumes based on the Beatles songs: Lucy in the Sky with Diamonds, Octopus’ Garden & Being For the Benefit of Mr Kite.

Swim, Bike, Run! This costume woud be really easy to pull together at the last minute with things you already have on hand! Group costume done!

Another really easy costume to pull together a the last minute for just a few dollars. Hit up the dollar store for a Sheriff toy set and you’re pretty much set!

Kids today may not know about the Double Mint Twins, but I totally do! All these two need is a tandem bike to ride on through the park and they are good to go!

These two girls are hilarious anyway, so this costume is perfect for them! A cardboard box can be transformed into a Nerds Candy couples costume!

Little Bo Peep (me) found a very unhappy Sheep! My daughter wasn’t too happy about her baby lamb costume. 🙂 But isn’t she darling?! See that pink dress? You’ve already seen it in this post – it was Galinda in the Wizard of Oz and Miss America 1980. It is the most versatile dress in our family! My niece has since worn it to be one of Cinderella’s step sisters!

Batman and Spiderman have to stick together! Super Hero costumes are really easy to find in stores and are a fun way to create a couples costume!

For those of you who need a simple, last minute, not to crazy halloween costume – here it is! A potato and sour cream!

Fake mustaches and a couple of trucker hats are all it takes to make a Mario and Luigi couples costume!

Aren’t my little kids so dang cute? I made the monster shirts for my husband and I (check out the full post here) and got my daughter this cute Polka Dot monster costume from Oriental Trading. My cute little squishy baby monster wore this pink monster costume.