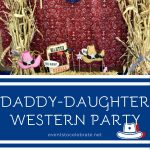 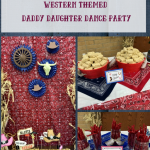 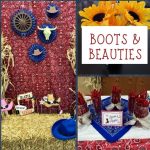 Each year, my daughters elementary school holds a daddy daughter activity night. This year we chose a Boots and Beauties Daddy Daughter Western Theme Dance party. As a committee, we had a great time coming up with cowboy western themed activities, refreshments and a music playlist that would keep them dancing! If you’re planning your own elementary school daddy daughter night, hopefully these ideas will make it a cinch for you!

On the food display tables we added a cute “YEE HAW” banner and corn stalk bundles. We also turned the red bandanna table cover into a table skirt by placing a white linen on top of the tables and taping the plastic table cover around the front of the tables.

We had a lot of fun creating the western theme refreshment display. We served unwrapped rice krispy treat squares as “Hay Bales”.

Using popcorn as a base, served in cups, we then had a variety of items to add-in so guests could customize their own “Happy Trails Mix”.

Because we were expecting 300 guests, we knew we needed several western theme party games and that they needed to be simple for all abilities and easy to understand because we wouldn’t be there at each station to explain how to play.

Photo Booth: We had a photo booth with lots of western photo booth props and the pictures turned out darling! To create the scene, we used the red bandanna plastic table cover on the wall, accented with corn stalk bundles, added some blue tissue fans with western accents and then had a large straw hay bale for guests to sit on.

There’s A Snake In My Boot: All you need is a few empty cowboy boots and some plastic snakes for this fun tossing game!

Steer Roping: This cute plush rocking horse and a lasso rope from a western supply store were a huge hit! The kids really loved swinging the lasso around to try and rope the little horse.

Pin the badge on the Sheriff: A mom on our committee used clip art to create these and had them printed at a print shop on large paper. She laminated them and the sheriff badges so they would be easier to reuse throughout the night.

Target Practice to Catch the Outlaws: With a few targets and plenty of nerf guns and ammunition, this was another game that was a big hit – especially with the dads!

Cowboy Hat Toss: With a few hula hoops, large containers and several hats this game came together in a snap!

The biggest portion of the evening was spent teaching them a line dance and some basic country two step. The instructor was fantastic and the dads and girls alike had a great time with this one! They were all so eager to learn and soon enough the entire gym was filled with the Boot Scootin’ Boogie! It was an incredible night and we were so happy everyone had such a great time!