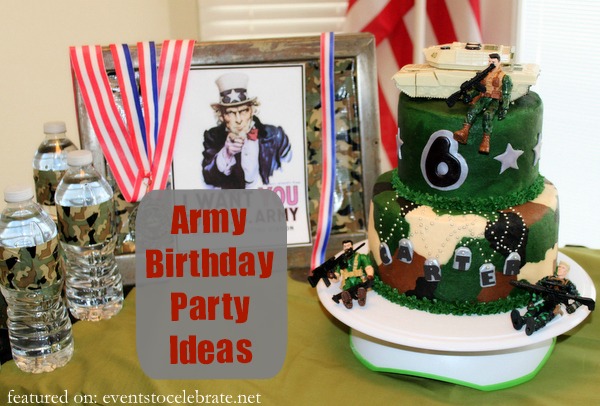 My friend Amy always does a fantastic job with themed party and I’m so excited to share one of her latest today. This Army Birthday Party for her son Carter is totally awesome, and she only spent $52.00 (minus the cake) which is a party for a BARGAIN! She got inventive and I love all the details. Let’s take a look at them:

For the favors she purchased some holiday tins at the dollar store and spray painted them, wrapped them in camo duct tape and scuffed them up a bit. Here’s where you can get some Scotch Duct Tape – Camo

To fill them she headed to the local recruiting station and asked for any free stickers or things they would let her have. They hooked her up! They gave her stickers, pens and a little football for EACH child’s favor box! Then she went to a specialty supply store called Uncle Sams where she found the REAL army patches and used shotgun shells for $1.00 each!

Isn’t that cake fantastic? She had our neighbor make it. I’ve just discovered that this neighbor does cakes, and I’m stoked about it! Now my cakes don’t have to look awful at parties I host! This camouflage cake adds the perfect centerpiece.

Using various shades of green fabric, she draped some across the ceiling, and more on the table accenting with lots of rope and twine.

She purchased a Camo Pennant Banner

to hang from the ceiling as well.

The American Flag was a must to display at the party.

She printed an Army advertisement off the internet and framed it and flanked it with some “medals” she her boys had from participating in various activities.

Now, this is what I love most about the party! These boys are just too cute and I can just picture how much fun they had with the creative activities she planned for them.

They had a Tug-O-War and other relay races.

They played Wounded Soldier and through giggles, dressed each others “wounds” in toilet paper.

They also had a push up contest – hilarious!!

Here are some FREE PRINTABLE Army Birthday Party Invitations I designed that would work perfectly with this party! Simply open the link and print at home or send to your local print shop (recommended).
Amy and her darling family of boys are hoping to adopt a little girl. If you want more information about their family search for a sister, go here.