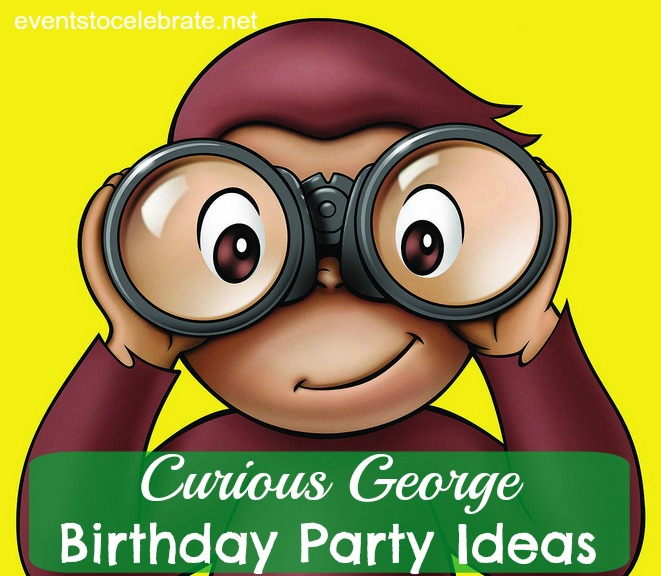 My daughter has loved Curious George since she started watching it. I thought she would have outgrown it by now, but she still asks to watch him every morning. We love the show on PBS as well as the movie that came out in 2006. It’s safe to say that I’ve seen a fair share of episodes and thought it would be fun to come up with a list of Curious George Birthday Party Ideas.

First, let’s get to know a few of the characters:
Man in the Yellow Hat
George – the monkey
Allie
Bill
Jumpy – Squirrel
The Renkins – farmers
Mr & Mrs Quint – a couple that live in the country and go fishing a lot
Steve
Betsy
Compass – pigeon in the city
Hundley – dog that belongs to the doorman
Gniocci – cat that belongs to Chef Pisghetti
Chef Pisghetti
Charkie – Dog in the city
Doorman
Professor Wiseman

You know how I love themed food. I love making a little label for the food with either a picture of the character or the name in a fun font. Here are a few ideas:

– Learn the box step (make diagrams of where the feet step like they had on show)
– Play doctor (on an episode called Dr. Monkey, George diagnosed all kinds of ailments)
– Put a bunch of tub toys floating in in a kiddie pool they have to get out with a scoop (like George had to do when his toys went down the drain in the bathtub)
– Create a mini petting zoo (ask to borrow your neighbors pets – especially bunnies)
– Make a mini pinata (like they do for Marco’s mother’s Day dinner)
– Paint a birdhouse (like George does so Jumpy won’t get all the acorns)
– Yellow Hat ring toss (find yellow cones or paint orange cones yellow with a black band and toss rings around them like that pictured below from Rust & Sunshine)
– Pin the Tie on the Man With The Yellow Hat
– Boat race in a kiddie pool – make paper boats and send them on a race!
– Play T-Ball (George learned how to count to 10 on this episode)
– Make a brown paper bag monkey or monkey mask (print one here) and sing 5 Little Monkeys Jumping on the Bed while you act it out
– Play Monkey in the Middle (here’s how you play)
– Newspaper Toss: Bill has a paper route and George loves to help him – you could collect newspapers and do a bean bag toss style game with them through a board with holes cut out or even just buckets set at different distances.
– Make sock puppets and put on a play (like George did for the Hansel and Grettle episode)
– Play “Who am I” by putting a character photo on each persons forehead and they have to ask questions to try and guess who they are or use them to play charades. You can get character photos here.
– Go to the park
– Go to the Zoo
– Go to a dinosaur museum or space museum
– Do outdoor exploring. Provide bug catchers, binoculars, magnifying glasses, etc. and let the kids roam
– Have an auction for simple things – print the money here.

– Yellow hat placesetting – yellow plate, yellow cup with black band around top of cup then turned upside down on plate (like that pictured above from Angel Street Mom)
– Borrow a bunch of the books from the library, make color copies of the covers and some of the pages and use them to make a banner or other decorations (even placemats at the table)
– Print out bananas and copies of George’s face to make a garland
– Lots of Yellow and Brown Balloons
– Curious George Pom Poms (pictured below – like these found on etsy)
– You can also just go the Amazon route for lots of Curious George party supplies