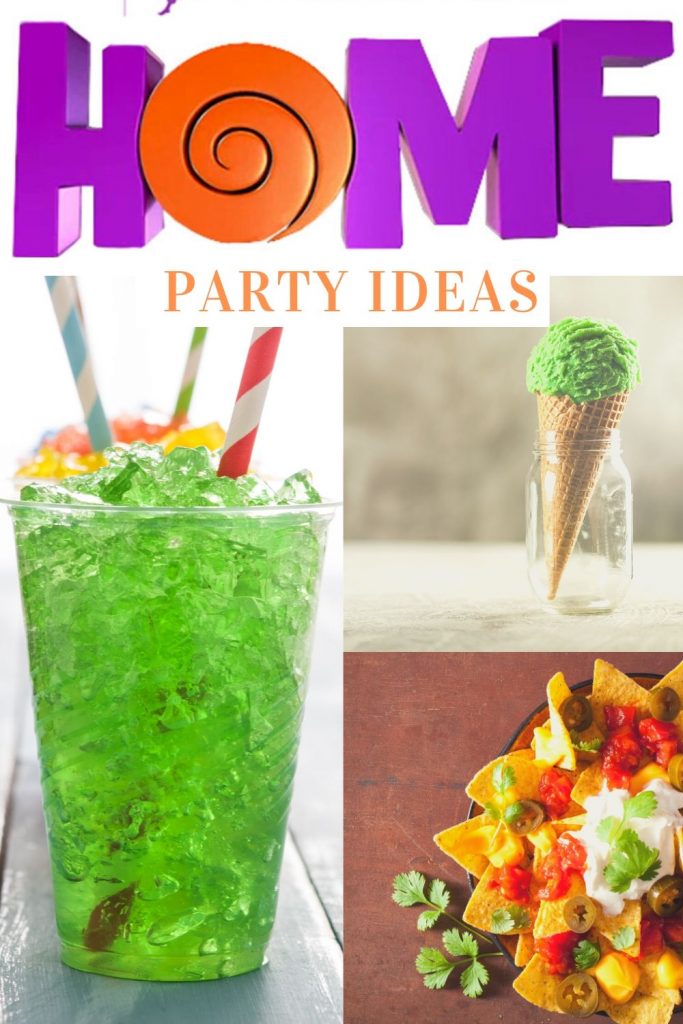 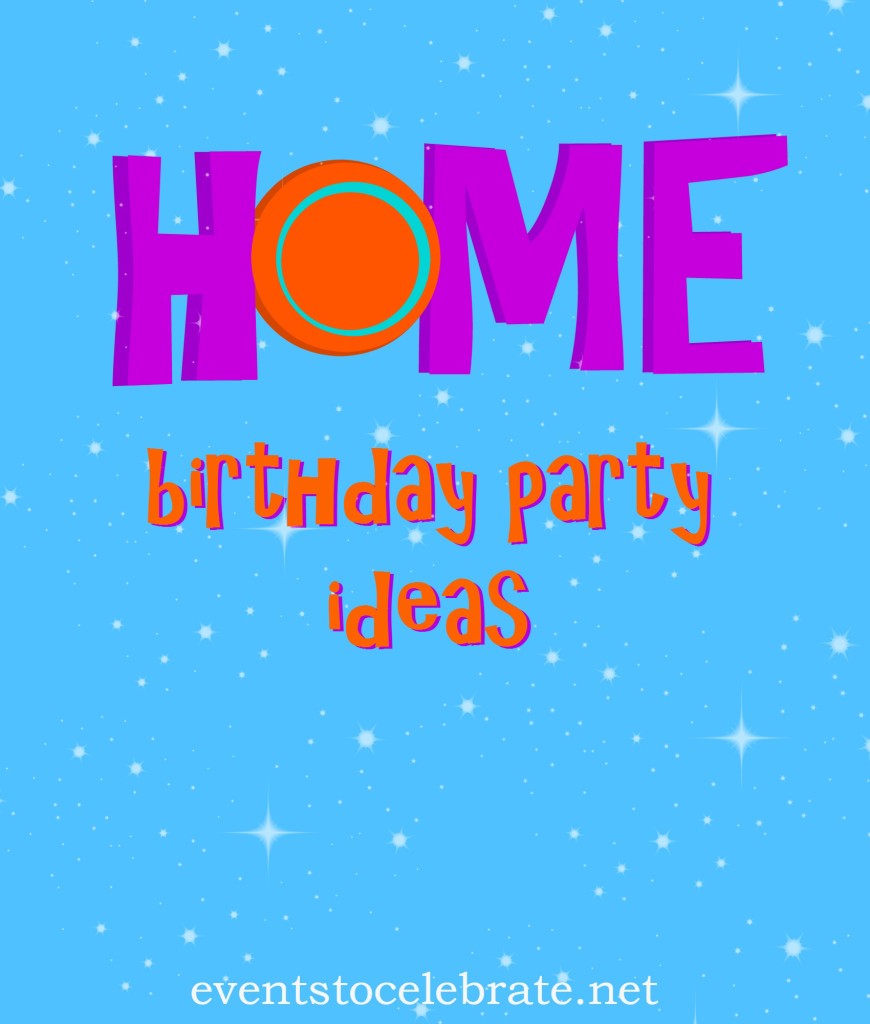 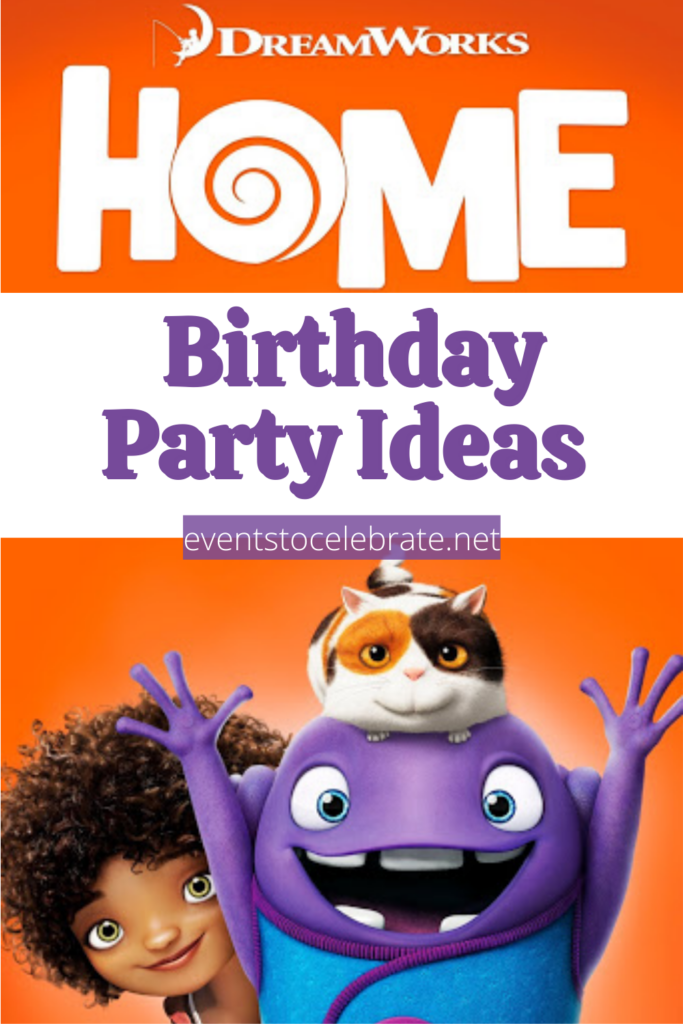 Some fun food and birthday party ideas around the movie, HOME fro Dreamworks!

One of our favorite movies last year was HOME by Dreamworks. OH, Tip (Gratuity), Lucy, Kyle, Captain Smeck, Pig the cat – the whole lot are hilarious! I love that the movies are geared for kids, but have enough wit and humor that adults enjoy them too.

As I mentioned in my Cinderella party post, my daughters birthday isn’t for 6 months, but this is one of the ideas we’re brainstorming for her party and I thought I’d share the ideas I have in case you’re looking to host one yourself.

So, again, while I don’t have finished party photos – hopefully they’ll give you a good jumping off point!

It’s a bit obvious, since they are a main feature in the show (even the car is named Slushious since it runs on slushies). I love the idea of letting the kids help make them. If you have an ice cream maker – like the Cuisinart Frozen Yogurt, Ice Cream & Sorbet Maker

(I have an orange one), you can make it by adding 3 cups of any flavor soda or juice to the ice cream maker and run it for about 20 minutes. It is so delicious that you won’t want to share. In the show they have Busta Lime, Grape Escape and Tangerine Twist. Find those soda or juice flavors and you’re all set to making your own slushies. No ice cream maker, just pour the liquid into a 9 x 13 pan and freeze. Scrape it with a fork every hour until it reaches the desired consistency.

When the Boov are collecting the humans to relocate them they give them an ice cream cone which they call “a frozen, sweetened, bovine secretion”. Put that on a tag and hand out some mint chocolate chip ice cream cones!

You see Tip filling her bag with this when she stops at the gas station and meets Oh for the first time. In addition to that reference, it plays off of Oh’s name.

You could turn them in to marshmallow crispy treats for a fun play on Oh’s name.

At one point in the movie they are trying to escape being captured and their car starts spewing nacho cheese since they rigged the car with all the gas station amenities. You can buy a giant can of the nacho cheese at Costco – or make your own with Velveeta cheese and rotel tomatoes.

At one point in the movie they set off Burrito Torpedo’s from the car to fend of enemy attackers.

Just for fun on the food display table you can add to the display toilet paper, mason jars filled with nuts/screws/bolts and motor oil. In the beginning when Oh is trying to host a housewarming party, these are a few of the items he has to offer his guests (that never come).

Give each child a cardboard box and let them decorate their own “Slushious” (the name of the car in the movie) with markers, stickers  and/or paint (depending on how brave you are). My friend Kara did a post with some darn cute card board box cars – check them out.

Captain Smek uses the Shusher to control his fellow Boov and it would be easy to make using any crafting supplies. A decorated paper towel tube and ring pop sucker would work, a wooden dowel with a painted rock that is glued on top would be great too!

Get your hands in the air like you just don’t care! This is pretty much a MUST for this party! The Home soundtrack

is so perfect too, great tunes for dancing! If you don’t have a crew that will dance themselves, put a bunch of dance moves in a brown paper lunch bag and have them pull one out and play a game of add-on. Do one move for 8 counts, pick another one from the bag to do the next 8 counts and keep adding on until you’ve got a whole dance! Need some dance moves? I’ve got a whole list of them you can print out in this post.

In the movie, Captain Smek steals the Shusher from the Gorg. The Gorg chase after them to get it back and that is why the Boov keep changing locations. Play Fishes & Minows HOME style. Have a few players stand in the middle and be the Gorg. The other players all start at one end of the field and have to run across to the other side without getting touched by a Gorg. If they are captured, they now become Gorg and you keep playing until all the Boov have been captured.

At Christmas they sell clear plastic ball ornaments for about $.50 each. You could have each guest make a Boov out of fluffy pom poms, googly eyes and pipe cleaners for the ears and then stand it inside a ball ornament since it looks just like the cars they drive. Then paint the bottom 1/4th of the ball to make it look like their bubble cars. These Ball Ornaments

are perfect because they open in the center, which makes them easy to fill!