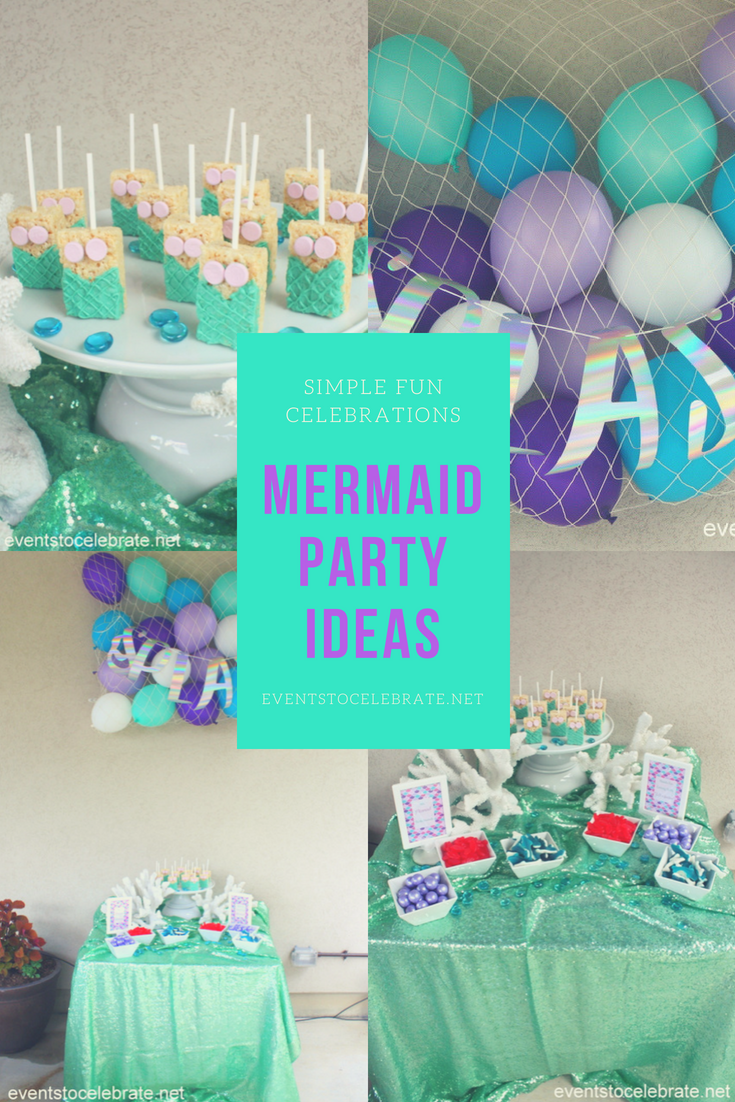 With a birthday in July it was inevitable that my daughter would ask for a swimming birthday party at some point. Since Ariel is her favorite Disney princess, I knew we had to turn it from beach balls and flip flops (see this party for those ideas) to a MERMAID birthday party! My first stop was Pinterest to search out all the amazing mermaid party ideas and then I modified what I found to fit my own style. Hopefully you’ll be able to do the same thing! Take what you see, make it your own or copy it outright! I’ll link to the products I used (affiliate links in most cases) so you can duplicate it if you choose to. 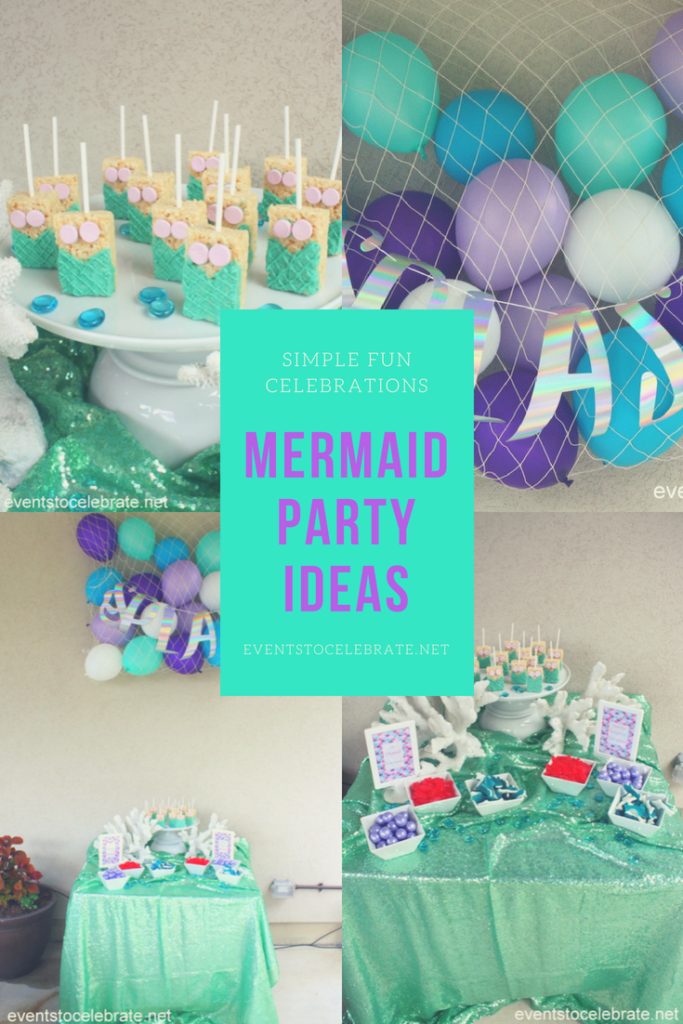 How do you host a summer swimming party with no swimming pool? Originally, we planned on getting out our triple lane slip n’ slide and putting the sprinkler under the trampoline, but then we borrowed this amazing inflatable Bonzai water slide from my in-laws and the party was basically planned! In addition, the sprinkler went under the trampoline so there were two areas of play. We also had hula hoops, bubbles and face painting by a “real” mermaid (my awesome niece)! 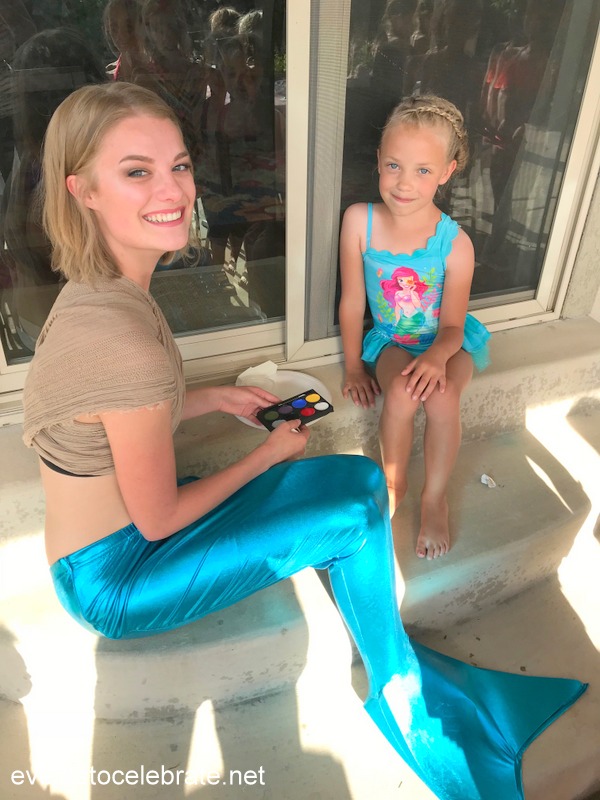 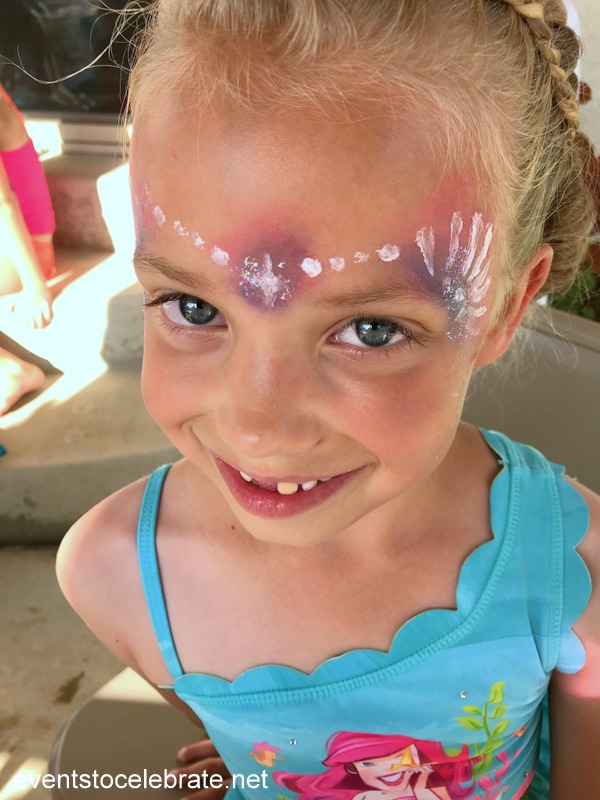 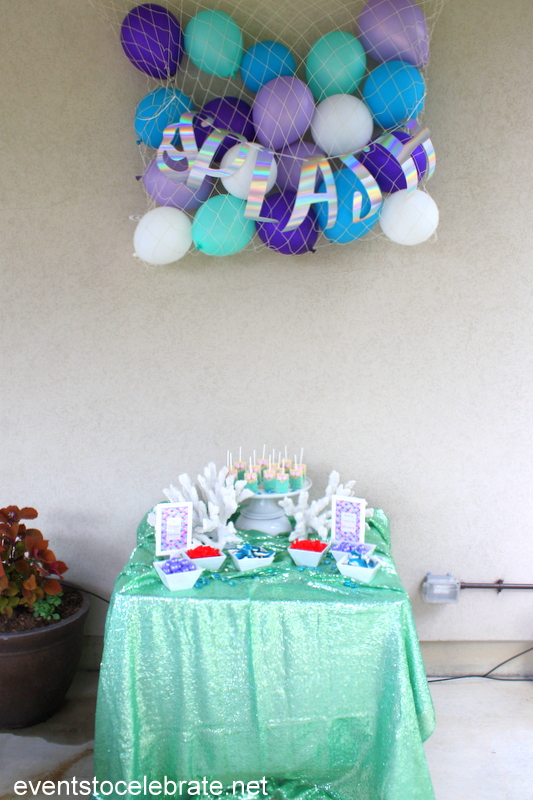 The Mermaid party decorations were the most fun to put together. There are REALLY cute Mermaid party supplies available right now because mermaid parties are so popular!

I started my dessert table with this amazing Mint Sequin Tablecloth. I am so excited to use this for other parties! Then I added a couple of cute signs and sprinkled blue glass gems around to give it the underwater effect. Lastly, I added these amazing coral pieces I borrowed from my sister (I believe they came from Pottery Barn). 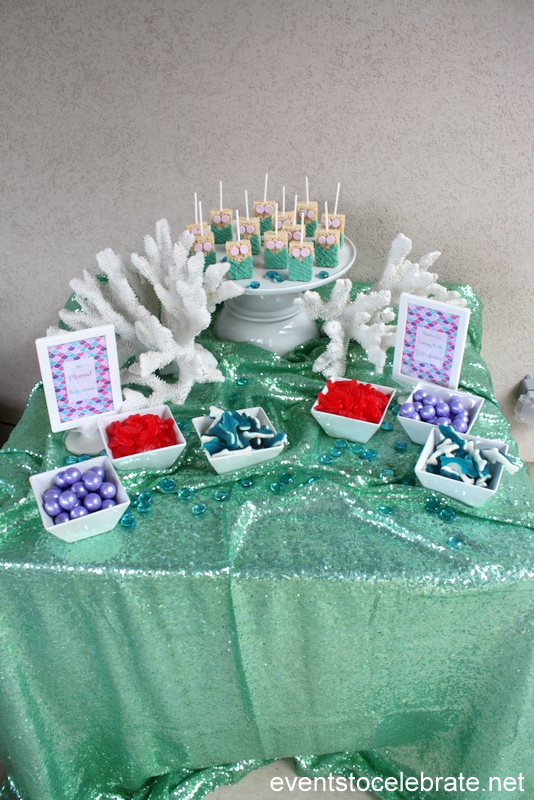 Above the dessert table I used a fish net decoration to hold  a variety of shimmery balloons and hung it from the ceiling. The word SPLASH came from a garland I purchased from Oriental Trading that actually comes as a set saying LAST SPLASH, but I just used the later. 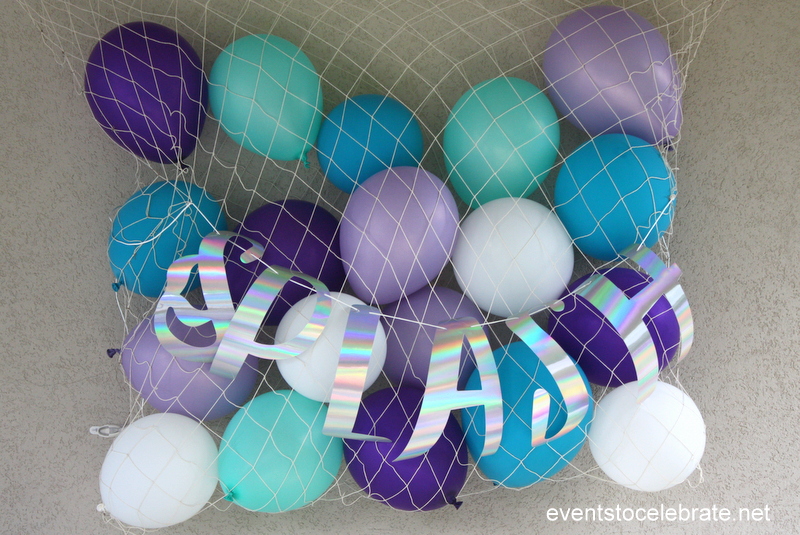 Hanging from two pillars on our patio I draped 3 garlands. First was an iridescent fringe table skirt, second was a purple tissue paper tassel garland and last was a mint half fan garland. I love how the half fan garland looks like sea shells. I purchased them all from Oriental Trading. 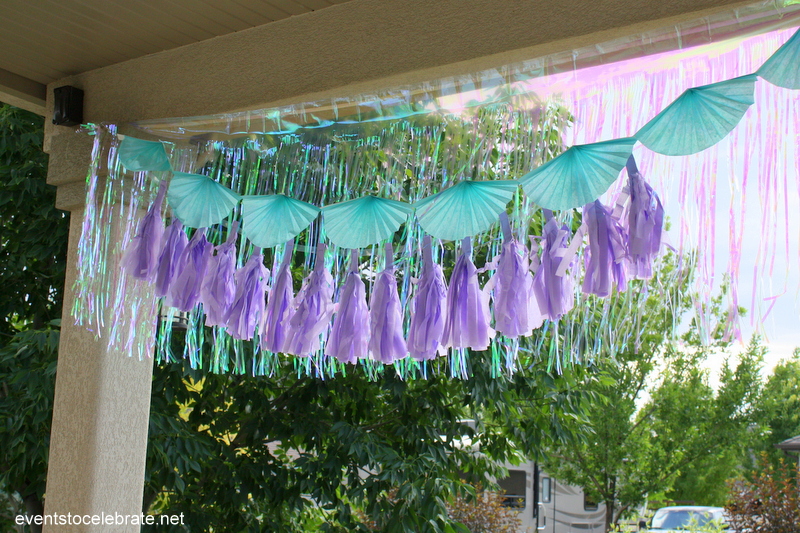 Decorating the table for the kids to sit at was a lot of fun. The paper goods came from Oriental Trading, but you can find similar ones here. I used a lavender plastic table cover and then sprinkled more of the blue glass gems and a 12′ iridescent  garland down the center (found at Walmart). The main centerpiece was a large coral piece with more frames (We Mermaid to be Friends & Thanks for Coming to my Shell-abration) on either side. 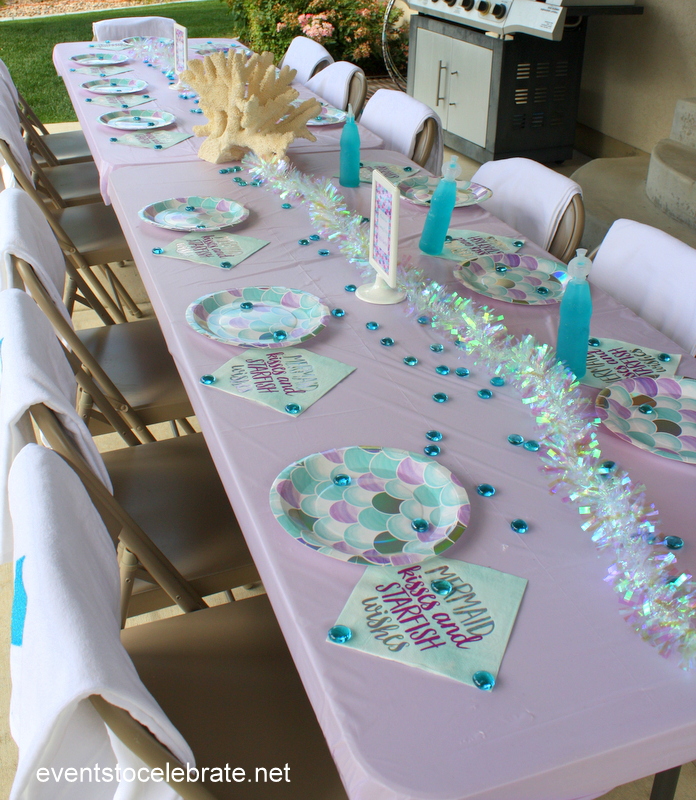 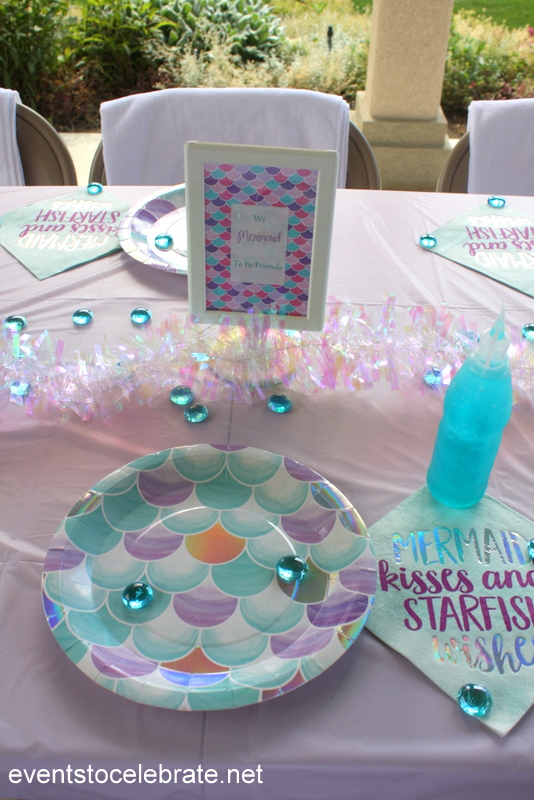 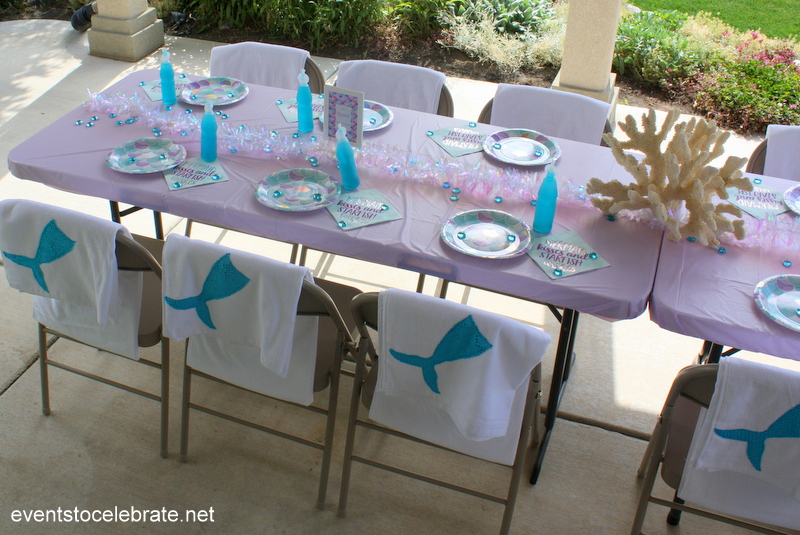 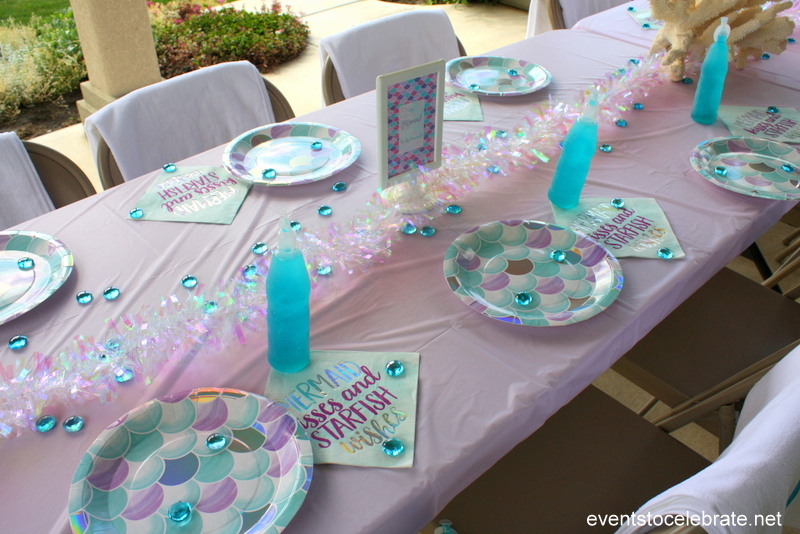 We served pizza and blue kool aid bottles for dinner. My daughter doesn’t like cake, but loves rice crispy treats so we turned them into mermaid bodies using dipping chocolates for the tail and baby yogurt melts for the top. I added swedish fish, gummy sharks and purple gumballs to small dishes and that rounded out our Mermaid party dessert table. 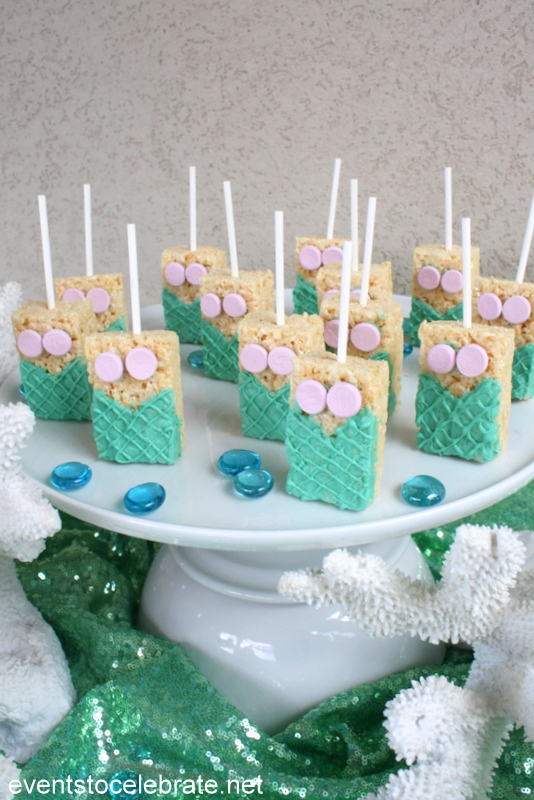 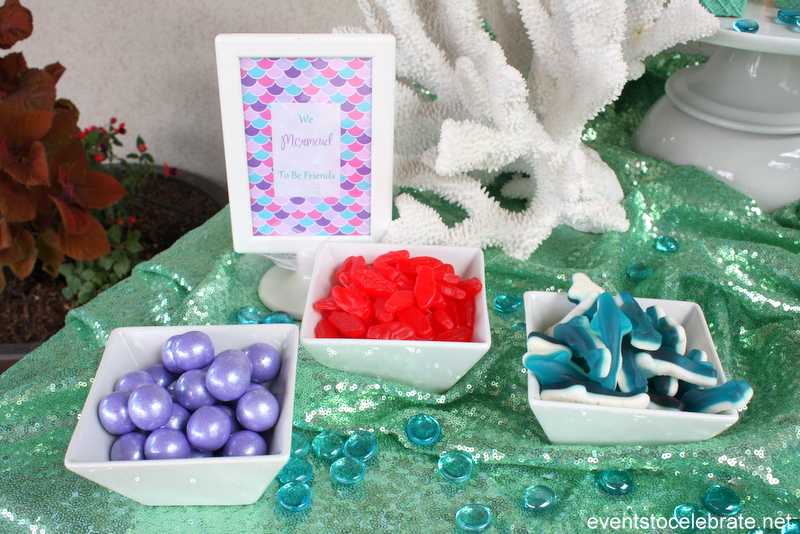 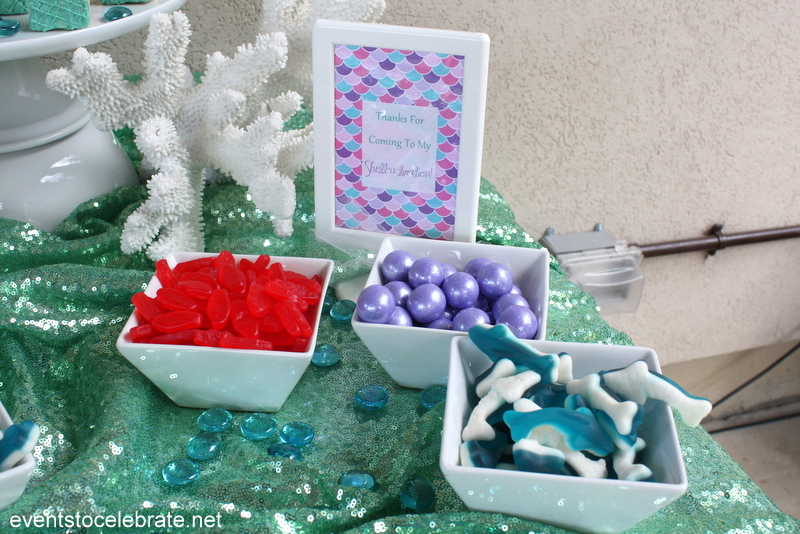 Along with a super cute Mermaid sticker set (thanks to the Target $ spot), each girl got to take home a Mermaid beach towel. I printed a tail template and used it as a pattern to cut out each tail in a sparkly blue fabric (used my JoAnns 40% off coupon). Then I used permanent fabric adhesive to adhere them to the towel (you may have seen this on my Instagram stories). I was worried that it would peel off after washing, but I’ve laundered my daughters twice and it still looks perfect! 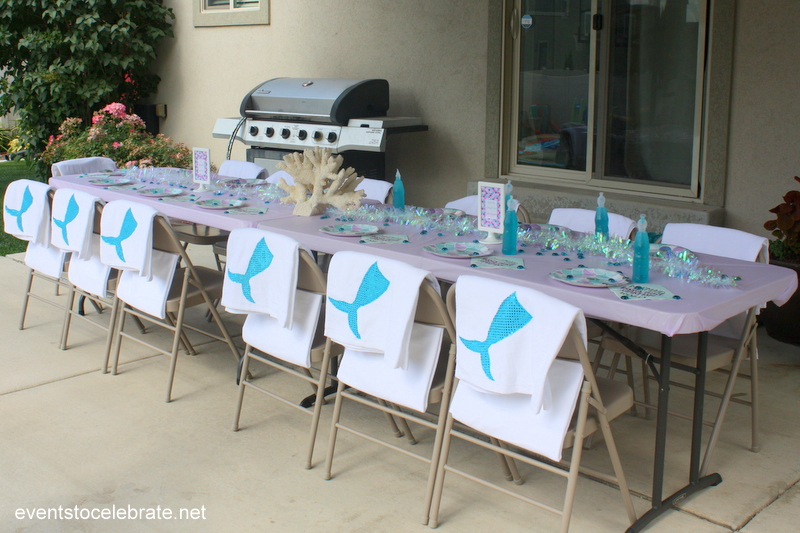 Your Main Event Prints on Etsy has some really darling invites! I bought this printable Mermaid birthday invitation one for my daughters party and loved that I was able to edit the pdf and send it to a local print shop. It came with a front and back design. Rather than have them printed double sided, I used the back design (mermaid scales) as the backdrop for my signs. It was only $6 for the design, that is SO worth it to me! 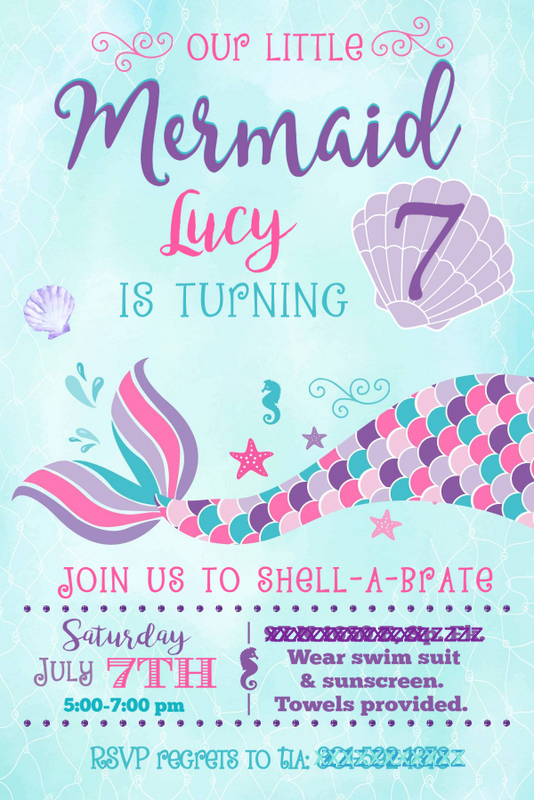 There you have it! It may have been 100 degrees outside, but we had an absolute blast at my daughters Mermaid birthday party. I hope you find something to help you celebrate your little mermaid!