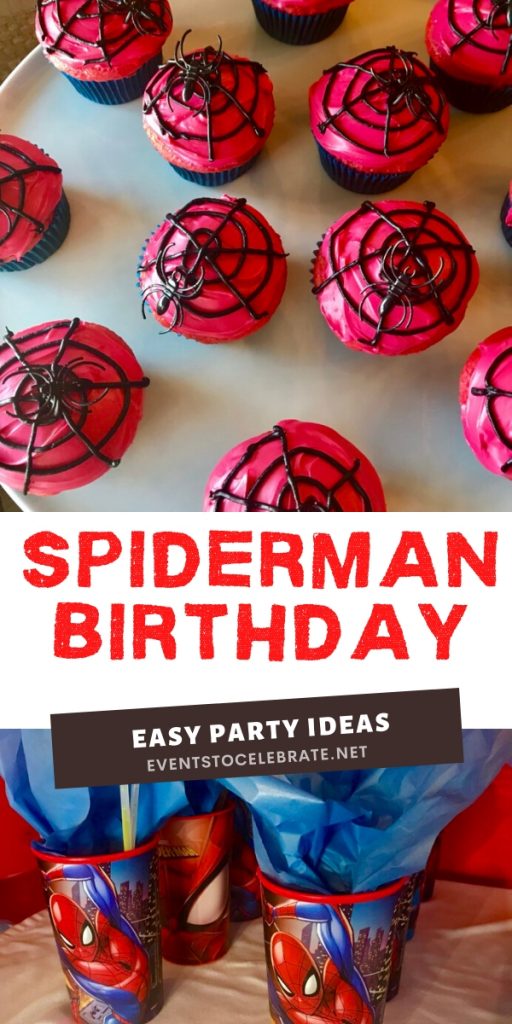 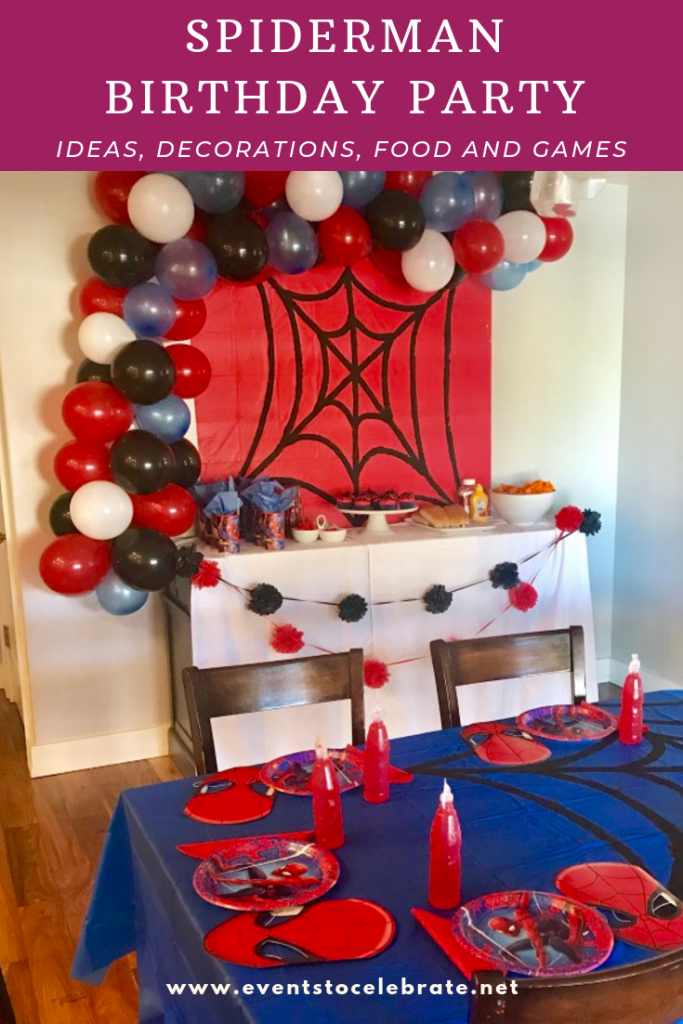 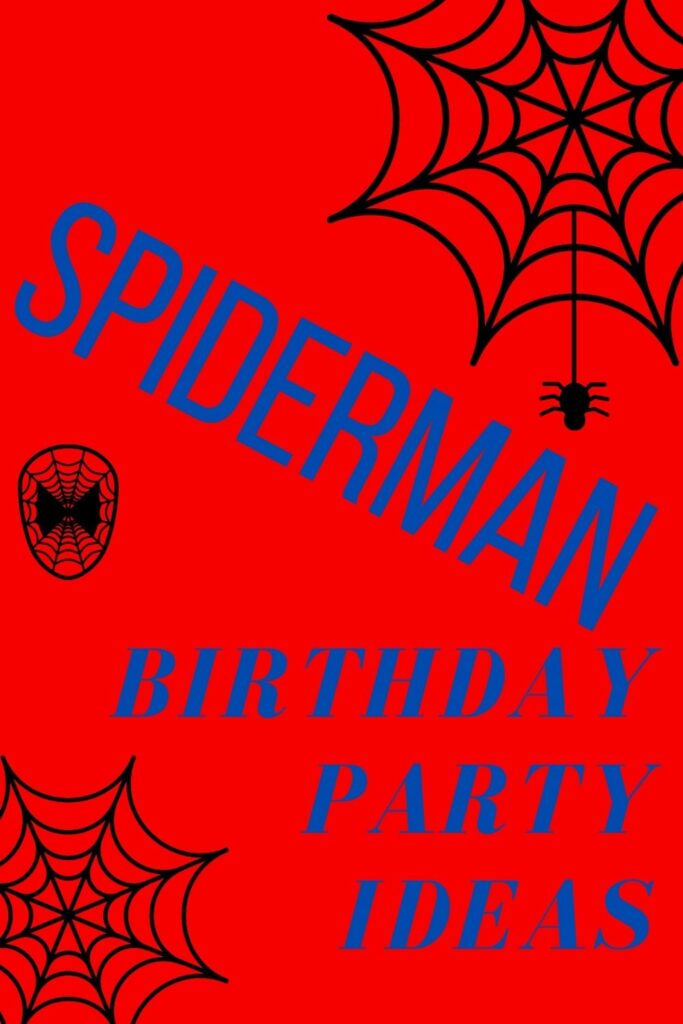 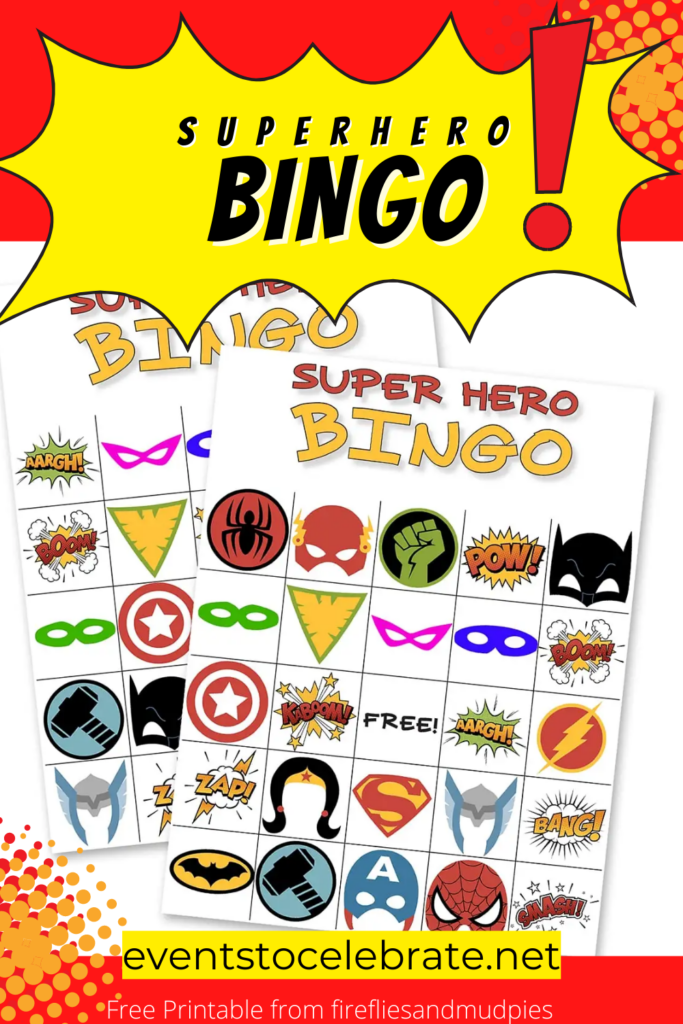 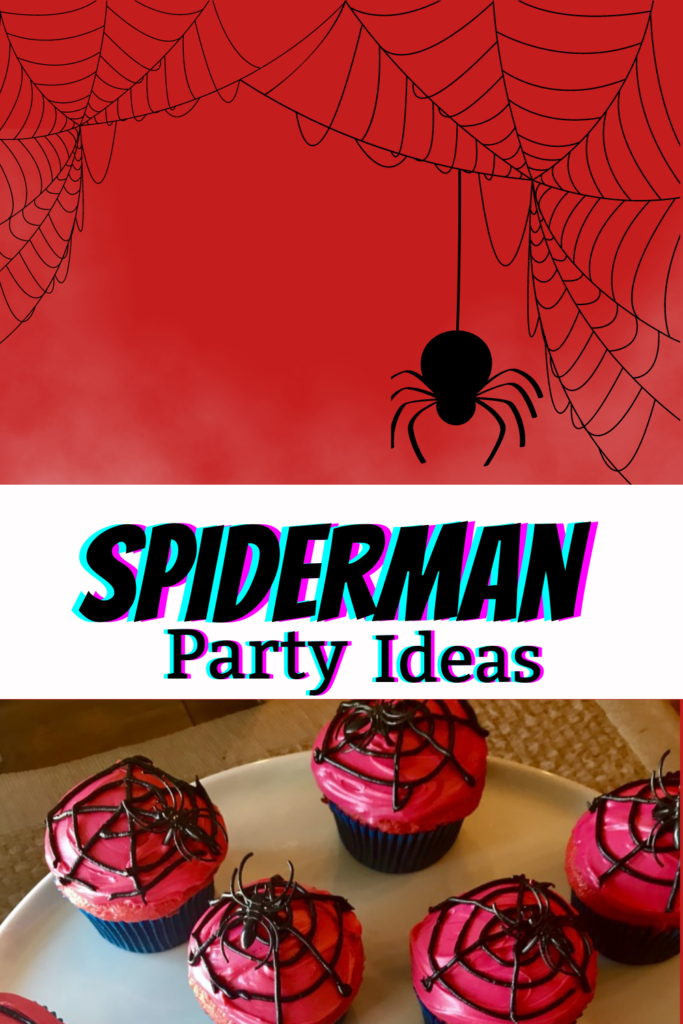 Looking for ideas to host a Spiderman Birthday party? We’ve got all your Spiderman party decorations, food, and games below!

If you’ve got a Spider-Man at your house you’ll love these easy Spider-Man Birthday Party Ideas! My son turned 5 and we had a great time training him and his friends on how to be a totally awesome Spider-Man!

For the main party backdrop I inflated blue, black, red and white balloons. I used a needle and fishing line to string them together and create a large balloon garland. I used Command hooks and more fishing line to hang it on the wall.

To create the red spiderweb backdrop I cut a red plastic table cover in half and used black craft paint and a sponge brush to paint a spiderweb. Once it was dry I taped it to the wall. I used this same method to create the blue food table cover. Adding a Spider-Man mask, Spider-Man paper plate and a red napkin and some red juice to each place setting finished the food table.

Leave it to the Dollar Store to save the day! We purchased a Spider-Man plastic cup for each guest and filled it with candy and glow sticks. They had a wide variety to choose from so we actually got a few different styles.

At the beginning of the party I told the guests that we were going to train them in all the ways they would need to become just like Spider-Man. Each game tested one of those skills.

For knowledge, we played Super Hero Bingo. It is a free printable that you can find at Fireflies and Mudpies. We used marshmallows as square markers and when they got bingo they got a piece of bubble gum.

To test their agility they had to navigate a laser maze we built in our hallway. Using tape and yarn we placed lengths attached to both walls to create the maze. They had to get all the way through and then slither back on their tummy.

For accuracy I set up a blue plastic table cover on the floor/wall. We used 10 red paper cups that I drew a spiderweb on to build a cup tower. They each got a can of Silly String to use to shoot down the cups. This was their favorite activity!

Speed is essential if you’re going to be a good Spider-Man. They sat in a circle and passed a ball around as fast as they could. Whichever guest was holding the ball when the music stopped was out and the game continued until we had a winner.

Pin the spider on the web

To test their performance under pressure we did a Pin the Spider on the Web game. I created this using poster board and black craft paint. We just used paper circles with their first initial on it as the spiders.

What’s a party without food?! We served

It was a really fun party and the boys really loved it! As they left we put their mask on each of them and said that now that they have completed their training, they are officially Spider-Man!