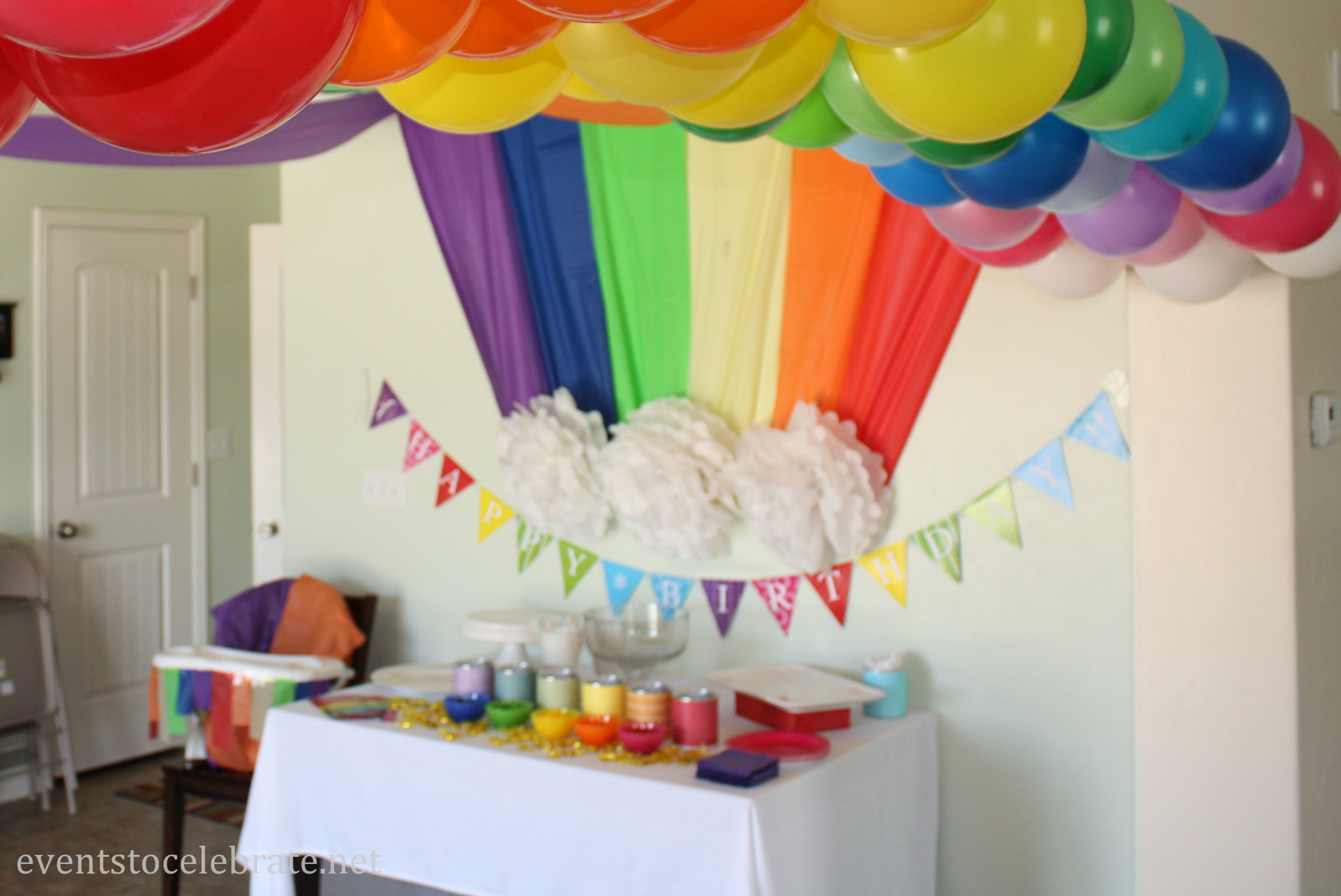 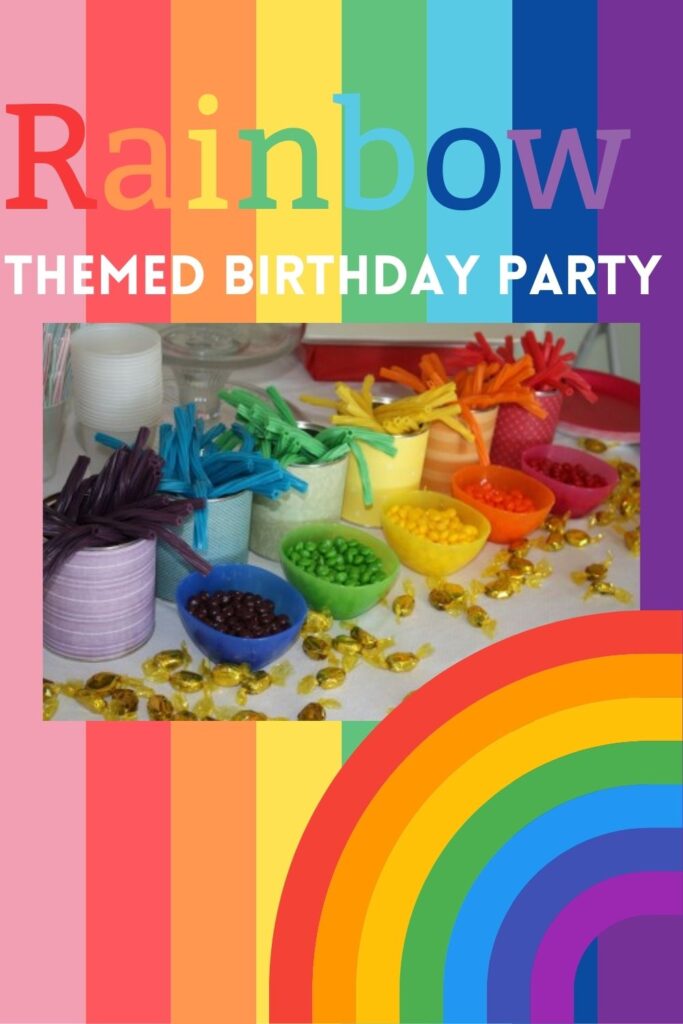 On the day my daughter Lucy was born there was a double rainbow that stretched across the sky. It was beautiful! For her first birthday we wanted to celebrate her with a Rainbow Birthday Party theme to tie into that special day.

When planning an event I look for ideas on party planning blogs I follow, pin ideas on pinterest and then hit the dollar store. That is always my first stop and I try to get as much there as I can. Anything I can’t get there I look for at WalMart, Hobby Lobby, Amazon, or a party supply store here called PartyLand.

I bought a few packages of assorted balloons from the dollar store and turned them into a fun rainbow on the arch separating the family room and the dining room. The hard part was keeping the balloons away from Lu after I had blown them up – she LOVES balloons!

I made this rainbow arch by cutting $1 plastic table cloths and taping them to the ceiling. Again, I bought as many of the colors as I could find at the dollar store and then had to buy a few of the colors at Hobby Lobby for $1.99 each. The “clouds” are just the tissue paper puffs as taught by Martha Stewart.

I found the pennant banner at Hobby Lobby for a few dollars and then added some cardstock letters I had in my scrapbooking stash. I love that I can reuse it over and over for lots of parties!

Even if you aren’t serving a lot of food or desserts, I think it is all in how you display them. The skittles and licorice wouldn’t have looked as cute if I hadn’t taken the 10 minutes it took to separate them. They make a bigger impact in large blocks of color. The slushy punch is rainbow sherbet with Sprite – YUM!

Do those cans look familiar? Yep, they are cleaned out baby formula cans that I then covered in scrapbooking paper. Since my daughter was bottle fed (don’t give me any hassle about that) we have lots of them. I’ve actually used them several times to put plastic utensils in at parties and I even made them into a cute party favor filled with caramel popcorn at my nieces baby shower. Back to the scrapbooking paper I covered them in, I also used strips of that same paper to create the rainbow on the invitations. I wanted to find gold coins to have at the end of my rainbow, but they were at least 3x more expensive than these butter cream candy – so I went with that. 🙂

After finding two cupcake ideas while hunting for inspiration, I combined the two ideas.  I love Marci Coombs, I don’t know her but I stalk her blog and secretly wish we were neighbors. 🙂 The printable toppers were FREE and can be found here along with a ton of other really cute free printables.

Okay, so I’m not going to win an award any time soon for my piping skills, but I was still decorating these 5 minutes before the party started and I blame the rush for my shaky hand. 🙂 They were still scrumptious. Donuts and frosting – can’t go wrong there!

Kid activity #2– Pin the cloud on the rainbow. Let’s pretend that doesn’t look as crappy as it does. My daughter was turning 1 – she didn’t care! Idea inspired by this. I know, the one on her website looks 100x better than mine, but remember how this blog is about not spending a lot of time or money? I used leftover parts of the table cloths and it took me all of 10 minutes (I know it looks like it only took me 5).

Kid activity #3 – Make a rainbow cereal necklace. Yum. I love fruity loopy cereal but I have textural problems with eating it off of soggy yarn. The kids didn’t mind though. 🙂

Kid activity #4 – Face painting! My sister-in-law did a great job painting a rainbow on each of the cute chubby cheeks in attendance.

The birthday girl! She had so much fun at her party, was confused by the singing and clapping and very daintily ate the frosting off of her cupcake.