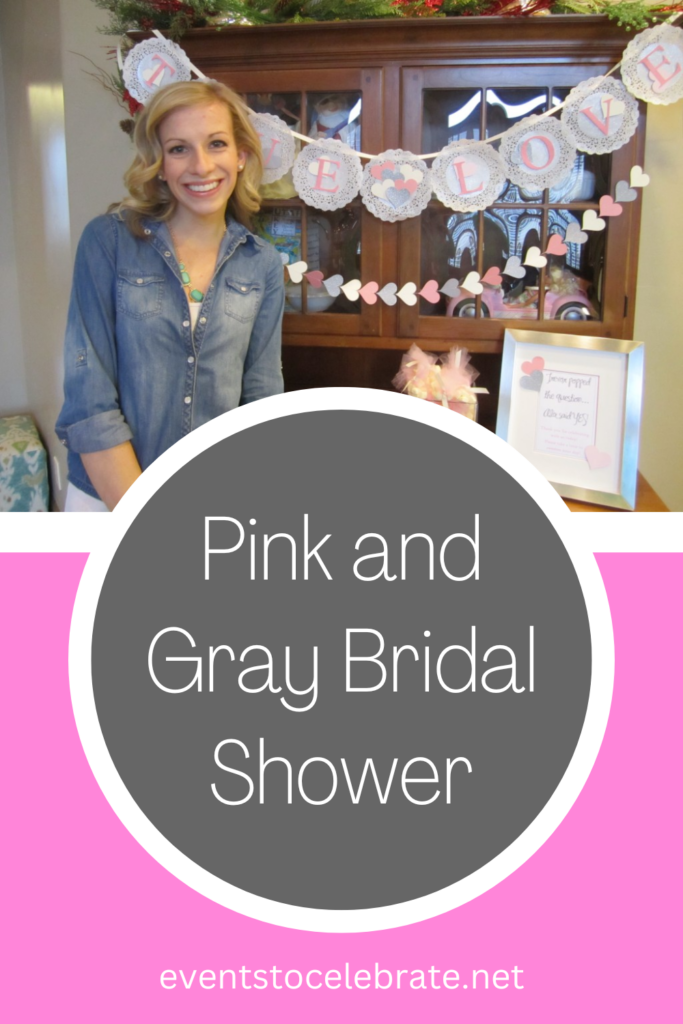 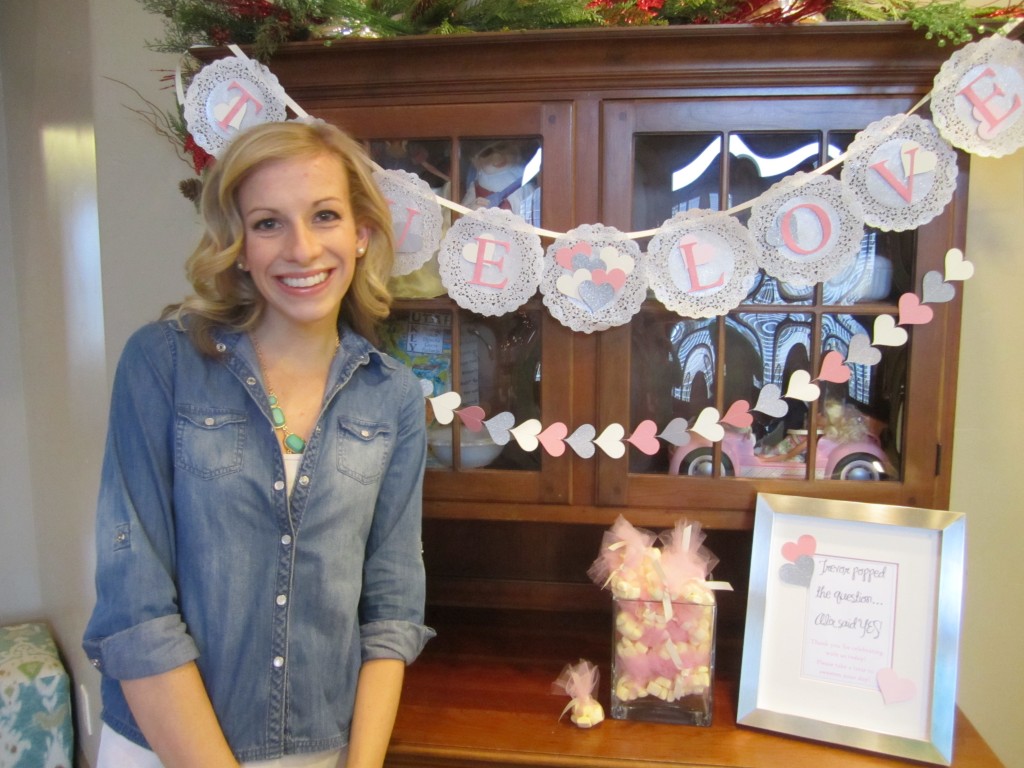 My sisters and I worked together to throw a brunch bridal shower for my beautiful niece, Alix. I had a lot of fun creating the decorations. Bridal Showers can be an expensive event to host, but if you plan it right and have a few people sharing the load, you can still have a really elegant event without breaking the bank.

I started by spraying gray cardstock and paper doilies with silver glitter spray. Then I used them to turn into the garlands. I used a Silhouette machine to cut out the heart shapes and sewed them together to make several garlands. Then I used them along with cardstock letters to create a “True Love” garland. I was going to spell out their names, but realized that if I kept it generic I could let others borrow it for their own bridal showers – AND – it could be used at Valentines Day for my decorations. 🙂 Smart thinking, right? 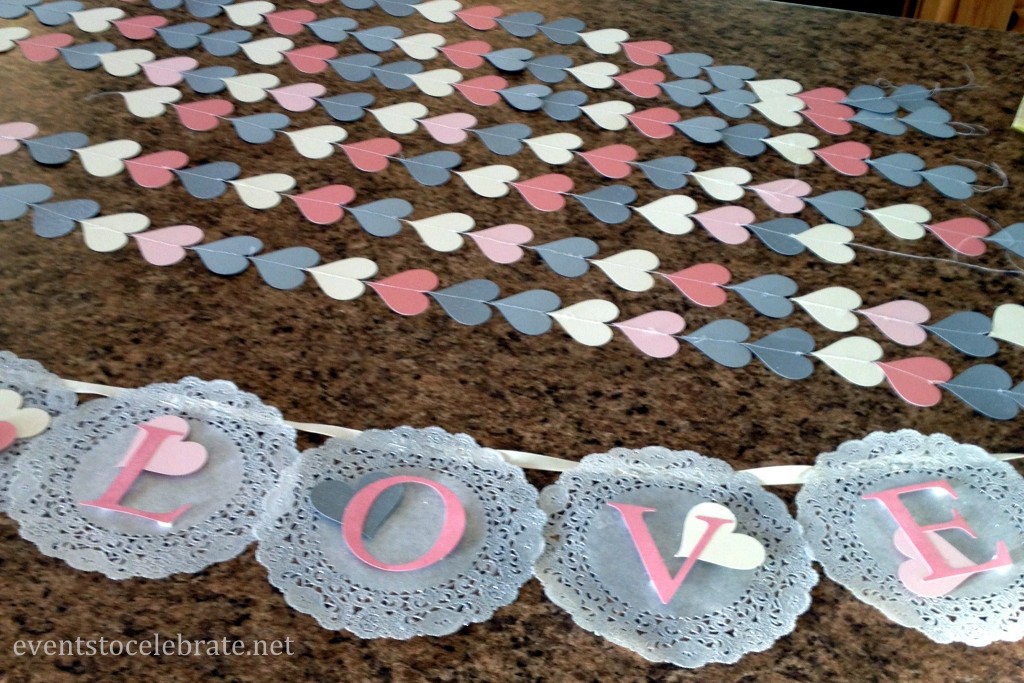 This photo shows the sparkle a little better. 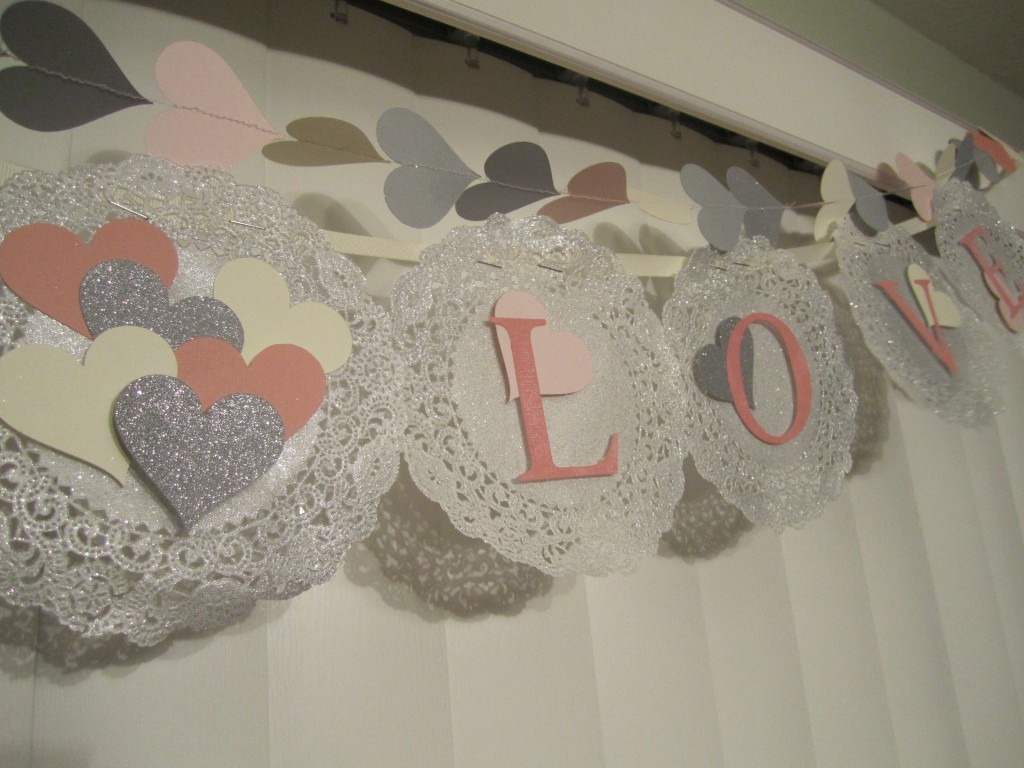 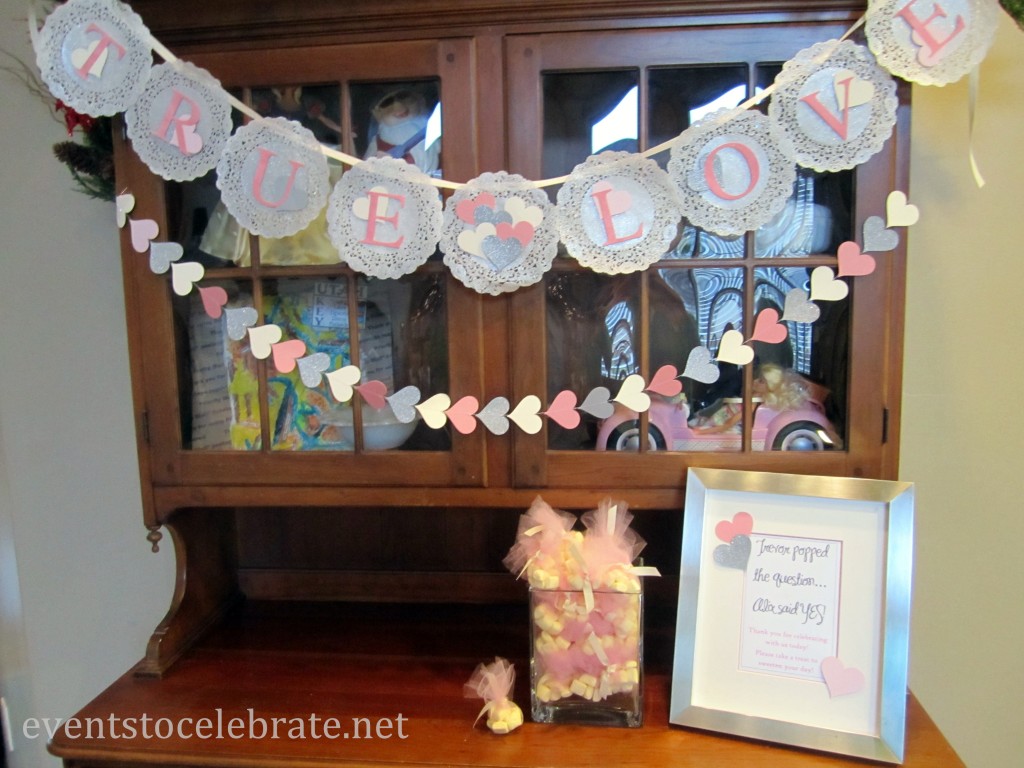 For the favors I purchased pink tulle circles in the wedding section at Hobby Lobby and filled them with butter mints. I printed the sign and framed it, adding a few hearts to the photo mat. 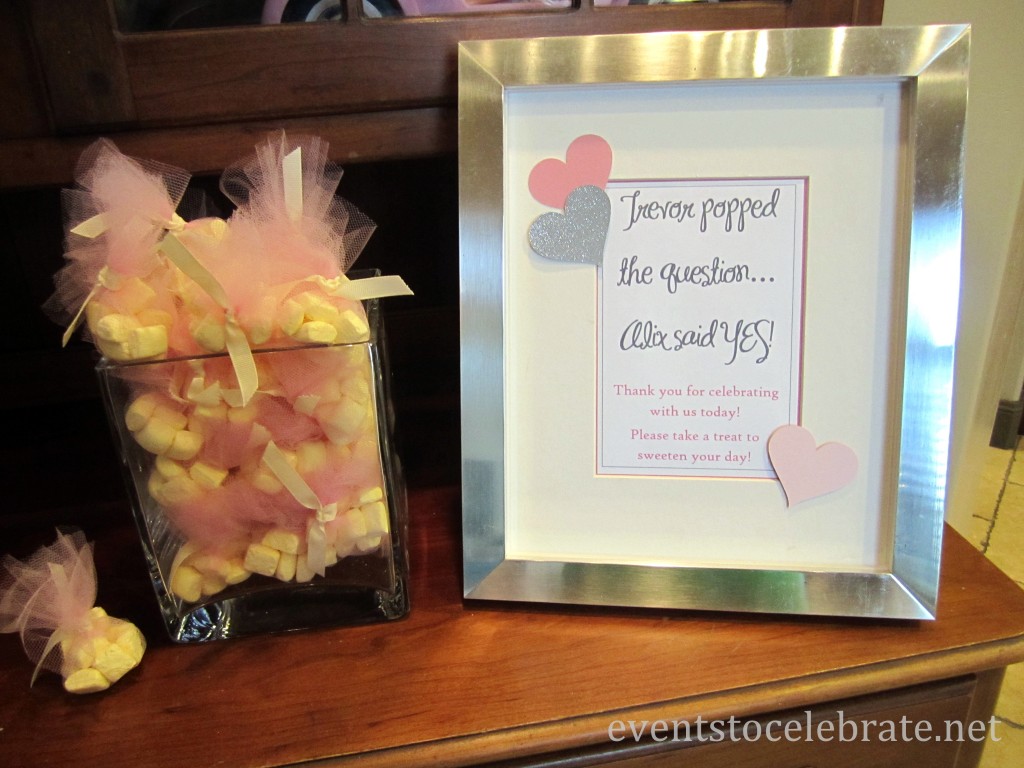 Over the food on the kitchen island, I hung strands of the heart garland, glitter sprayed doilies and pink and gray metallic tissue paper pom poms.

You know how it goes, when you are getting things ready you don’t always get photos after the party starts – so this is the only one I had of the drinks – before they were filled. We served water with lemon and orange juice. The containers were simply accented with a glittered doily and a drink label. 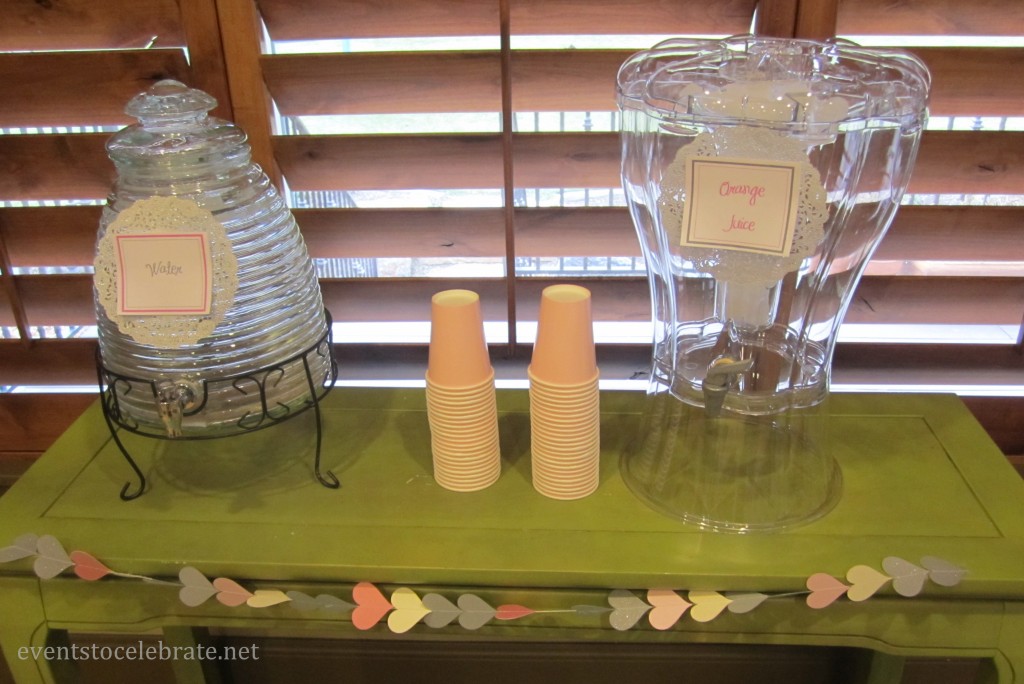 Guests were invited to build their own parfait with the choice of raspberry or vanilla yogurt, homemade granola and frozen berries (blueberries, raspberries, blackberries). 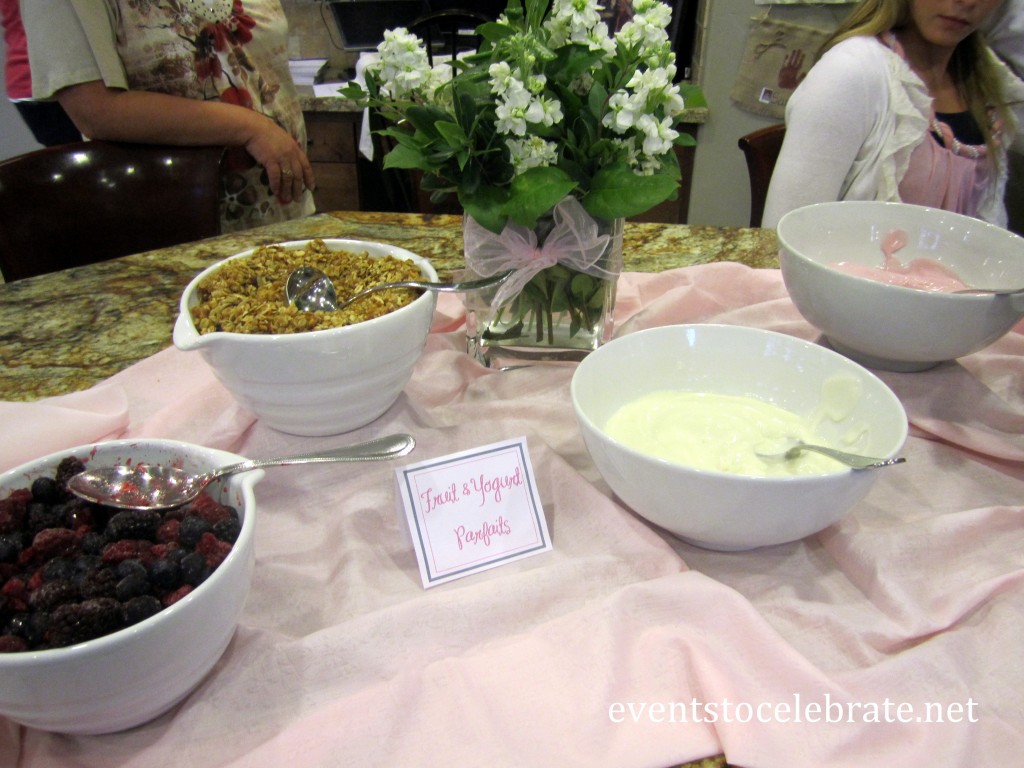 We also served delicious Shirley’s sweet rolls in Orange, Cinnamon and Raspberry. I think I ate at least 3. They are so incredible! Then to round out the menu a honey baked spiral ham (not pictured) was kept warm in a crock pot for guests as well. 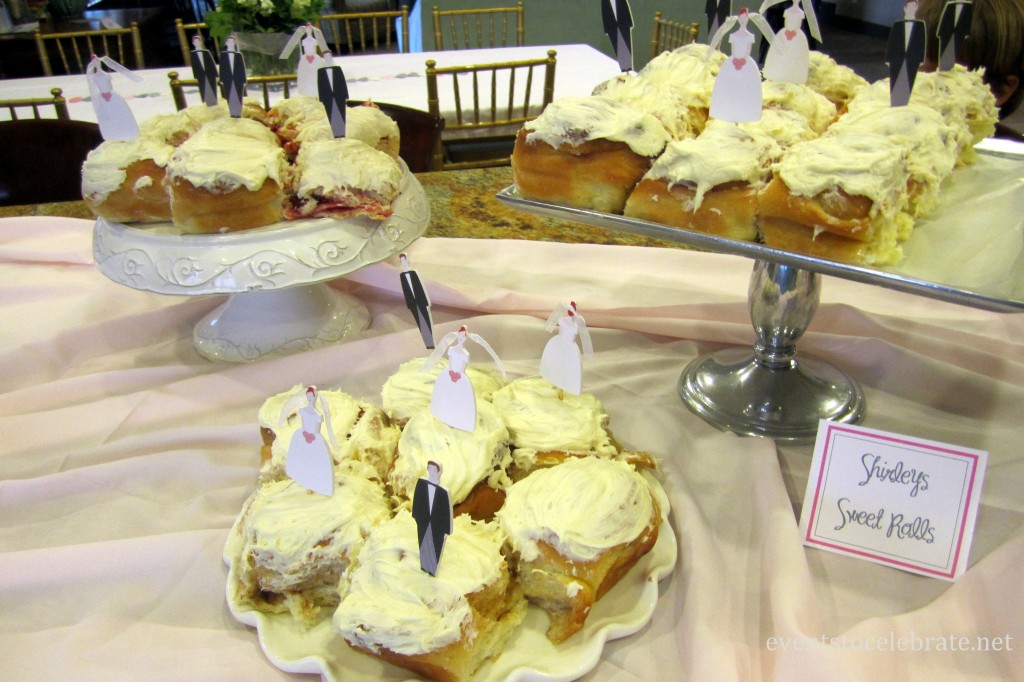 We kept the activities simple, but since this was her only shower there were friends as well as both sides of the family and the games helped bring everyone together. As described in this post, we played the Mustaches & Lips game as well as the Connect 4 game while she opened gifts. 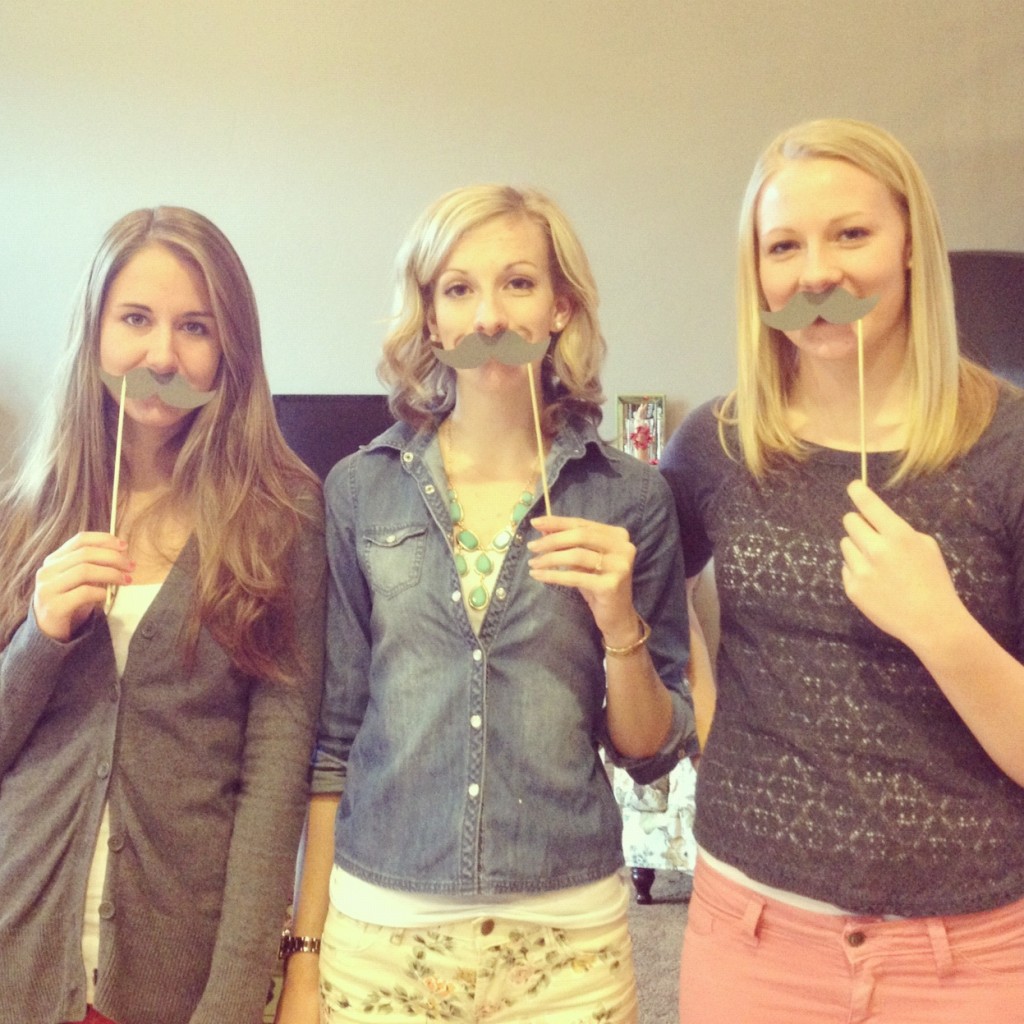